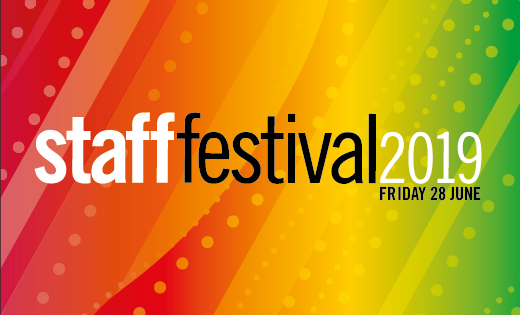 Comments via the online Staff Festival survey revealed the vast majority of those attending the event thoroughly enjoyed the mix of activities. But colleagues also used the survey to highlight aspects of the Festival they felt could be improved this time around.

Issues raised included the length of queues at some of the most popular stalls and the signposting of attractions on campus, as well as sustainability concerns.

Festival team members have acted to address as many of these issues as possible, while still working hard to ensure everyone attending this year’s event on Friday 28 June has a great day.

Jo Westerman, LOGIK Centre Manager and Festival project manager, said: “The Staff Festival is very much your event and we work hard to try and make it a success. While it is really well received and enjoyed by most, we’ve listened to what you had to say and made some exciting changes to improve this year’s event.

“We really hope you like what we’ve added to the 2019 line-up, and we’ll be repeating the survey on For Staff next week to analyse feedback.”

A number of changes have also been made to improve the sustainability aspects of the Festival.

This year we are very excited to announce the Festival is fully balloon free! We have replaced balloon decorations with reusable bunting and ribbons and our balloon modelling event with a free drop-in streamer making workshop.

In line with the University’s pledge to remove single-use plastic from campus by 2023, we’ve also taken steps to reduce our use of such materials. Due to the complexities of this, there will be some single-use plastic at Friday’s celebrations, but we have made big strides to permanently remove it from future Festivals.

Other achievements this year include:

“The removal of balloons and raising awareness of water fountains are just the starting point. We know there’s more that can be done and we look forward to working with the team further on the transition towards becoming a fully sustainable event.”