A report by Jennie Hibbard from the recent Technician Commitment Signatory Event in London. 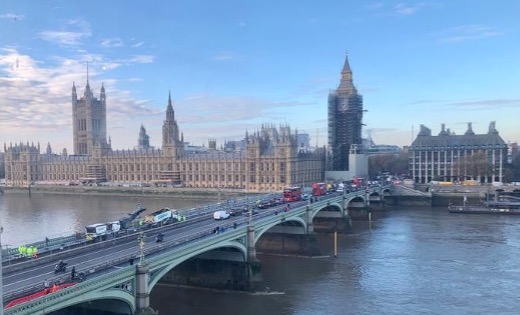 The Technician Commitment now has over one hundred signatories from HE and Research Institutes. These are institutions that have pledged action against the key challenges facing their technical staff.

I am proud to have been nominated to represent the University of Leeds at an in-person Technician Commitment Signatory Event that was held at County Hall in London on the 23 November. The original venue was meant to have been the House of Lords, however, due to restrictions in numbers in Parliament we were moved to the opposite bank of the Thames, next to the London Eye, with fantastic views across to the Houses of Parliament.

I had been fortunate to attend a virtual signatory event during lockdown, but this was the first time that a technician from Leeds has attended one of the in-person signatory events. It was amazing to be in a room where everyone present had a real passion and intention to make improvements for the technical community. Everyone who attended willingly shared ideas, best practice and supported others who were just starting out on their Technician Commitment journey. Each signatory was able to send one representative, and there were also representatives from other supporters such as UKRI, the Science Council, the Gatsby Foundation and many professional bodies*.

The main proceedings ran from 9.30am - 4.30pm and were jam packed with a mixture of presentations, discussion, and feedback. This included reviewing some important reports that have been recently released including:

These reports draw on experiences and feedback from technicians, so it is important that we contribute to this research where we can, as it does have the potential to bring about change.

We also heard some examples of best practice including from the Wellcome Sanger Institute, some videos that have been launched by the GW4 Alliance, and an amazing sustainability success story (LEAF) from the University of Exeter.

Some of the people involved in the TALENT policy commission gave an update on progress and I am looking forward to seeing the full policy when it is launched at the start of next year. There are some really exciting ideas, and we can all play a part in helping to implement these once this is launched.

In the evening there was a drinks reception overlooking the Thames, which I did not stay for.

The University of Leeds was awarded an Impact Award for our Stage 2 self-assessment and we will look to display this alongside our submission award which is on display in Parkinson Court.

The day left my head spinning with ideas and feeling re-invigorated to continue with the progress that we are already making at Leeds. I have been inspired by many of the ideas that were shared, and by just how much progress has been made at a national level since the Technician Commitment was launched in 2017. At the start, there had not been an intention to move into policy work, but this has happened through the response from the sector and technicians are now mentioned in many government policies including the R&D roadmap, where both technicians and the Technician Commitment were referenced.