Wake up Leeds, you’ve got gold in your veins 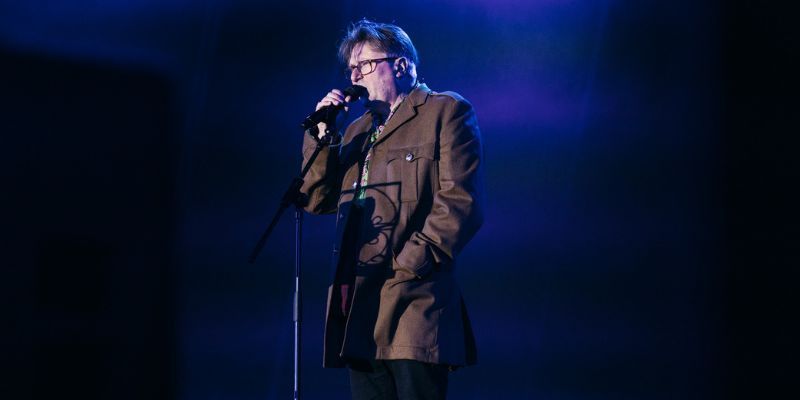 Thousands gathered at Headingley Stadium to celebrate The Awakening, to mark the start of LEEDS 2023, a year packed with events to highlight the city’s culture.

you’ve got gold in your veins,

you’ve got diamonds for brains,

Simon, who is also a patron of LEEDS 2023, said: "The event at Headingley Stadium was everything it promised to be: a festival atmosphere, a community feel but with global ambitions, celebratory, shimmering Yorkshire rain through pin-point lasers - a spectacular happening.”

“The band I'm part of, LYR, had been commissioned to write a new song to play at the show. ‘Awakening’ takes the mythological brick giant of Holbeck and makes it a totem for some kind of artistic and imaginative uprising, inviting the people of the city and its environs to see their surroundings and live their lives through the lens of the arts - dance, film, song, literature, painting, whatever.

“It was very emotional on stage - we all wore a white rose as an emblem of alliance and delivered the song into what felt like a cauldron of collective pride and good will.

“Something emotional - that's what we wanted to deliver - a song that avoided the musical pitfalls and poetic cliches of an anthem but had chords and a chorus that might be thought of as thematic - of the night and the year to come.”

The University is a principal higher education partner on Leeds 2023.

The partnership is being developed and led by the University’s Cultural Institute to nurture collaborations between arts and culture, the creative industries, academics, and students.

It was announced last year that Arts Council England had awarded the Cultural Institute £788,000 to fund its PLAY (Participation, Learning & Arts for Youth) creative education scheme as part of LEEDS 2023. The project is set to engage more than 68,000 participants over the 12 months, reflecting diverse communities in Leeds and moving towards establishing a funded creative education across the city.

The University’s Horizons Institute and Cultural Institute are working with LEEDS 2023 on For the Public Good, a collaborative programme that will see five academics at Leeds paired with artists based internationally, aiming to increase engagement with climate justice through technology.

Horizons Institute has also worked on My World, My City, My Neighbourhood, which will commission 23 artists to experiment with ideas and ways of working post-COVID to enrich the creative voice within the heart of Leeds communities.

The Cultural Institute and cultural producers will be working on a programme of cultural events on campus in 2023. More information on this soon.

The ‘First Chapter’ of events for Leeds 2023 is now live, but a callout is still active for volunteers. If you would like to volunteer to participate you can sign up on the Leeds 2023 website.