It is with immense sadness that the University of Leeds has learnt of the death of Her Majesty Queen Elizabeth II. 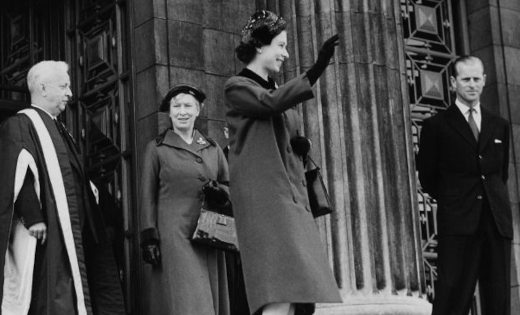 Elizabeth II was crowned Queen of the United Kingdom and made Head of the Commonwealth in 1952, and in June this year, the Platinum Jubilee honoured her 70 years on the throne.

Her Majesty Queen Elizabeth II visited Yorkshire many times during her reign. In October 1958, she and Prince Philip (pictured above) attended an orchestral concert in the University of Leeds’ Great Hall to mark the Leeds Centenary Music Festival.

Professor Simone Buitendijk, Vice-Chancellor of the University of Leeds, said: “At this time of national mourning, we offer our deepest condolences.

“Throughout the region, as across the globe, the Queen has had an enormous impact and her passing will be keenly felt by many.

“While we feel great sadness at the Queen’s passing, this is also a time to reflect upon, admire and celebrate the life of an individual who was enormously respected across the world.”

Among the Queen’s enduring legacies for the University is the awarding of three Queen’s Anniversary Prizes – the country’s highest honour for UK colleges and universities.

In 2009, a Queen’s Anniversary Prize was awarded to the Institute for Transport Studies for 40 years of sustained excellence in teaching and applied research.

The Institute of Medical and Biological Engineering won a prize in 2011, for innovative joint replacement and regenerative technologies to improve quality of life.

And Leeds received a prize in 2021 for research in climate and extreme weather, aiding vulnerable communities in the Global South with new forecasting and warning systems.

The University extends its deepest sympathies to the Royal Family. As a mark of respect, the Union flag on the Parkinson Building is being flown at half-mast during the official period of national mourning. There’s also a book of condolence on the Leeds City Council website.

RT @policyleeds: If you're a @UniLeedsStaff colleague working in policy-focussed research and we haven't mentioned your work on our blog th…

RT @UoL_Sus: Don't miss the opportunity to contribute to this consultation on the Leeds Climate Local Plan - deadline 19 December! @UniLee…