Giving a voice to mature students

One of Leeds' newest student support groups has been recognised with a Partnership Award within their first year, highlighting their outstanding collaborative efforts.

The Mature Student Advisory Board have received a Partnership Award within its first year. 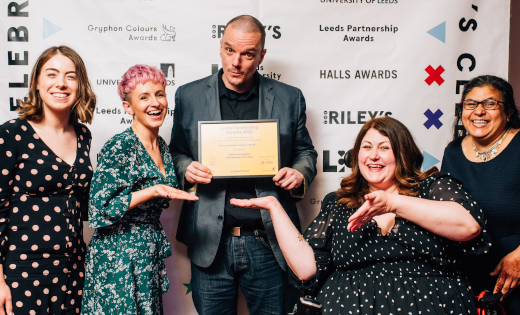 The School Community Partnership of the Year category of this year’s Leeds Partnership Awards highlights areas such as community working to help reduce the awarding gap, or partnership working to listen to, and act on, student voice initiatives.

This year’s award was received by the Mature Student Advisory Board, which is part of the Lifelong Learning Centre (LLC).

The board – made up of 15 mature students from across the faculties with staff facilitators – was created in October 2021 to serve the University’s diverse community of mature students, and to help bring their voices and experience to the heart of the LLC – as well as the University more widely.

Nominations praised how their work has made mature students feel more connected to the wider Leeds community, as well as how engaged and insightful the board’s members have been across their initial meetings with senior leaders from the University and Leeds University Union (LUU).

Another common theme was the immediacy of the impact that the board’s establishment has had.

Besides creating a forum for mature students to shape work and generate ideas, their input has already contributed to work towards the aims of the University’s Student Success Strategy, as well as the Student Education Conference.

This has all led to the Mature Student Advisory Board receiving a Leeds Partnership Award within its first 12 months of operation.

“It’s been an absolute joy.”

Some of those who nominated the board in particular highlighted the work of Luren Huxley, Student Experience Officer, and Laura Conroy, Student Success Officer, in setting it up. 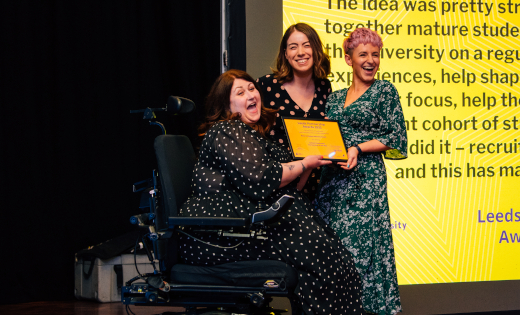 Lauren Huxley said: "We were absolutely delighted that the Mature Student Advisory Board were recognised for their work this year.

“It's been so wonderful to work with this outstanding group of students, and to win a Partnership Award in its first year is testament to their commitment and influence on the University.

“We're so proud of the group and so happy that the voices of Mature Students now have a formal space to create real change and impact at the University of Leeds."

The School Community Partnership of the Year award celebrates meaningful change developed in partnership with school staff and students.

It is also intended to celebrate the development of peer support with a school or faculty, or the creation of a new society to support the school community.

Paul Devlin, Student Support Officer in the LLC, was one of those keen to highlight the speed with which the new Mature Student Advisory Board has managed to bring people together and start making a tangible difference to the Leeds community.

He said: “It’s been an absolute joy to work alongside such an inspirational, dedicated and wonderful group of students and staff. I am genuinely delighted that the Mature Student Advisory Board are deservingly being recognised with this award.

“In an unbelievably short amount of time, this group has formed, quickly found its legs and immediately started to bring about real and meaningful change. This has ranged from working with academic skills teams, to improving provision for mature students, shaping thinking about mature students’ sense of belonging, guiding us on how we can better support student parents, and more.

“They haven’t just talked the talk – they have been an active driving force for some future projects and exciting change. This award validates their work so far and makes me excited to see what this partnership brings in the next 12 months.”

The annual Leeds Partnership Awards celebrate the achievements of staff and students who truly put into practice the agreement setting out our shared commitment to work together to support all aspects of our University community.

The winners were announced during a gala celebration on Monday 9 May.

More in-depth profiles of each of the winners will appear on the For Staff website during the coming weeks. These will also be promoted via the weekly All Staff enewsletters and the Staff Twitter account

RT @UoLConcerts: Half way through our Summer Festival. Still lots more fabulous music and events to see. Tickets available on the door. Her…