Two prominent Leeds figures have been elected as Fellows of the prestigious Royal Society. 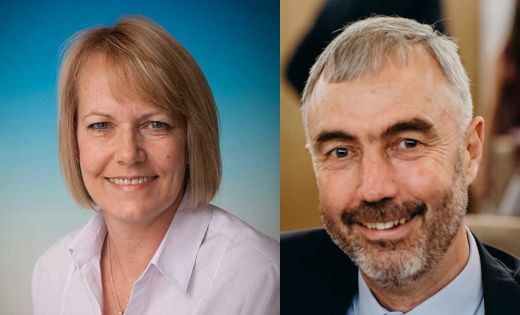 Our Chancellor, Professor Dame Jane Francis, has been commended for her significant contributions to knowledge of the climate history of polar regions.

Joining her is Gregory Houseman, Emeritus Professor of Geophysics, who is acknowledged for his pioneering work leading our understanding of the deformation of Earth’s continental crust and lithosphere.

Dame Jane worked at Leeds from 1991 to 2013, the last five as Dean of the Faculty of Environment. She became Director of the British Antarctic Survey in 2013 and was appointed Chancellor at Leeds in 2018.

She said: “I’m absolutely delighted to have been elected as a Fellow to the Royal Society.

“It’s an honour to have my research and support of science recognised in this way, and I’d like to thank all my colleagues, past and present, without whom this would not have been possible.”

Professor Houseman joined Leeds in 2001, where he taught in the School of Earth and Environment.

He became Emeritus Professor in October 2019.

He said: “I'm very happy that the Royal Society has recognised our research achievements at Leeds, within the Institute of Geophysics and Tectonics and the COMET consortium  (Centre for the Observation and Modelling of Earthquakes, Volcanoes and Tectonics).

“I’ve been fortunate to work with many excellent scientists over the years, using computer model calculations, seismic imaging and satellite geodesy to understand where, why and how the continents are deforming and what that means for earthquake risk in many parts of the world.”

Vice-chancellor, Professor Simone Buitendijk, said: “The awards made to Jane and Greg in recognition of their work in crucial areas of scientific discovery are richly deserved.

“Their achievements in their respective fields have helped to improve the lives of people around the world, but their contribution is felt most deeply here at Leeds, where successive cohorts of our students continue to benefit from their passion and dedication.

“I congratulate them for this recognition by the Royal Society, the world’s oldest national scientific institution, which holds our shared values of international and global co-operation at its heart.”

Founded in 1660, The Royal Society promotes and supports excellence in science, provides scientific advice for policy, and fosters international and global co-operation, education and public engagement.

Sir Adrian Smith, President of the Royal Society, said: “The global pandemic has demonstrated the continuing importance of scientific thinking and collaboration across borders.

“Each Fellow and Foreign Member bring their area of scientific expertise to the Royal Society and when combined, this expertise supports the use of science for the benefit of humanity.

“Our new Fellows and Foreign Members are all at the forefronts of their fields from molecular genetics and cancer research to tropical open ecosystems and radar technology. It is an absolute pleasure and honour to have them join us.”