Universities in Leeds – Together for Pride 2020

We have joined forces with Leeds Beckett University and Leeds Arts University to develop a Digital Pride programme that evokes Pride’s ethos. 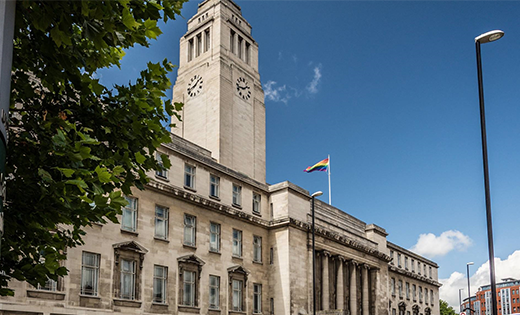 This year marks the15th anniversary of Leeds Pride and 50 years since the first Pride march in New York in 1970. This came one year after the Stonewall Uprising in 1969, when the city’s Stonewall Inn was raided by the police in the early hours and three nights of unrest followed.

Lesbians and trans women of colour were some of the key people involved in the act of resistance, including Stormé DeLarverie, Sylvia Rivera and Marsha P Johnson.

Pride is a highlight of the year for many in the LGBT+ community, an occasion that brings the diversity of Leeds’ community together for a key point of protest and celebration, and a reminder of the power of standing together.

Due to COVID-19, the organisers had to make the difficult decision to postpone the 15th anniversary celebrations for the safety of all involved.

In response to that news, the Universities have developed a Digital Pride programme: Universities in Leeds - Together for Pride 2020.

Starting on Monday 17 August, celebrations of Leeds Pride will be showcased across a range of digital channels.

The LGBT+ Staff Network and Equality Policy Unit (EPU) have been actively involved in shaping the content for this programme. You can find out more about this on the EPU website.

All of the organisers hope that you will enjoy delving into what the programme has to offer.

Alongside Leeds Arts University and Leeds Beckett, we have collaborated with Hyde Park Picture House to create a self-curating LGBT+ film programme.

The programme provides links to more than 25 films, both long and short form films, through which can navigated as a personal mini Pride Film Festival. This includes selections suggested by LGBT+ author, musician, poet Rosie Garland (aka Rosie Lugosi); and members of the LGBT+ networks at the three coordinating universities.

The full film listing and podcast will go live on the University’s Medium account later this week. Follow the University on Twitter where we will be sharing all Medium articles as they go live throughout the week.

What Pride means to you

Leeds staff, students and alumni have shared their written perspectives on what Pride means to them.

Read their stories in this Medium article.

Colleagues from Leeds Beckett University have set up a "Rainbow over the library” Spotify playlist, with more than three hours of music.

Past events in the city

In July, as part of the Friends of Dorothy Silver Pride event, Leeds Beckett and Stonewall took part in an online discussion about the importance of Pride. You can watch the LGBTQ+ discussion panel with special guests online.