We are lighting up the University in rainbow colours to help mark Leeds Pride. 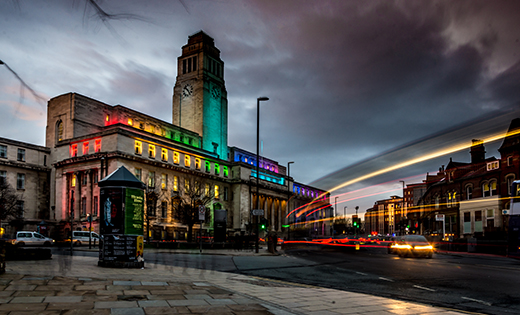 This weekend would have marked the 15th anniversary of the event, and 50 years since the first Pride march was held in New York City.

Whilst Leeds Pride has been postponed until 2021, the weekend is still an opportunity for us all to celebrate how far LGBT+ equality has come, whilst also acting as a reminder of the progress yet to be made.

The LGBT+ Staff Network and Equality Policy Unit have also been working on a collaborative ‘Digital Pride’, which will be launched during the week beginning Monday 17 August. This virtual celebration aims to bring you a range of online content, including LGBT+ book and film lists, online discussions and signposting to support and resources.

More details will be announced soon

There’s a wealth of LGBT+ information and support available through the University, including the: