New and impactful collaborations are celebrated in a report highlighting the incredible shared successes of Nexus. 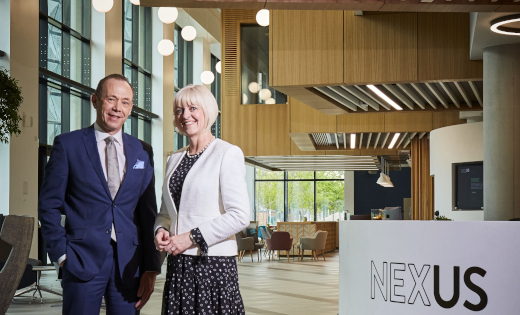 As our innovation hub marks the first anniversary since it officially opened its doors, the team behind this pioneering partnership between business and academia has been taking a moment to reflect on the amazing projects generated during the past 12 months.

We Are One: Building the Nexus Community reveals £10.8 million in collaborative research funding has been awarded as part of the ground-breaking initiatives between members and the University, helping tackle some of society’s biggest challenges.

Nexus is now home to 35 high-growth innovative businesses, working together with our academics to drive impact. And the momentum is gathering pace to facilitate future partnerships and further boost value for the University.

Professor Lisa Roberts, Deputy Vice-Chancellor: Research and Innovation, said: “At the launch event for Nexus a year ago, I spoke about the vital role universities have to play in supporting innovation and productivity, and how the Nexus team would enable businesses to access the academic expertise and capabilities at the University of Leeds.

“In an incredible first year, the collaborations we have forged through Nexus have exceeded every expectation in delivering on that promise, and I am sure that Nexus will continue to be a catalyst for innovation across the region and beyond.”

Dr Martin Stow, Nexus Director, added: “In our first year, we’ve facilitated new and impactful collaborations between members and colleagues across the University, who together will solve some of society’s biggest challenges.

“As we celebrate our first anniversary, we want to extend our thanks to our many colleagues across the University for their role in shaping Nexus, as well as supporting our members and the amazing projects underway here.” 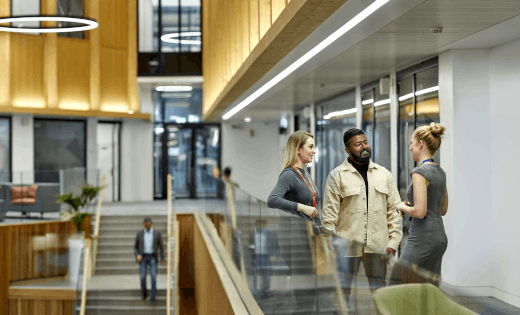 Collaborations through Nexus have led to £10.8 million in research funding

Our vision is for Leeds and Nexus to become an even stronger powerhouse for innovation, recognised nationally and internationally as a benchmark for how universities should collaborate with business to deliver impact.

Thanks to the brightest entrepreneurial and academic minds at Leeds, Nexus members are fast-forwarding this vision with some truly innovative and ground-breaking results.

As part of the new report, colleagues from across the University have been sharing their experiences of how this is being achieved through being part of the Nexus community.

Among them is David Hogg, Professor of Artificial Intelligence (AI). He said: “For many years, the University has led the way in seeking societal impact from research. Nexus has taken this commitment a step further in creating a new kind of campus-based location for research-rich companies and organisations.

“Since opening, relationships with these organisations have been greatly enriched by almost daily interactions in the public spaces of Nexus. For my own research on AI, this has resulted in a close working relationship with two start-up companies now located in the complex. Both are developing exciting new product technologies, supported by a growing network of research relationships across the University.” 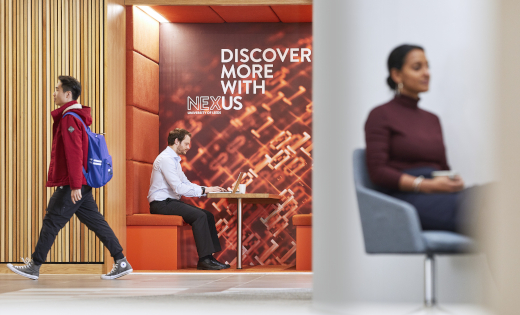 Collaborations through Nexus have led to £10.8 million in research funding More than 125 jobs, including 23 for Leeds graduates, have been created in the first 12 months since Nexus officially opened its doors

Nexus was created to bring together business and academia; where new ideas are conceived, researched and developed. Its purpose is to deliver real impact, not only for members and the University, but across Leeds, the city region and beyond.

And the figures speak for themselves.

Nexus members have created more than 125 highly skilled jobs during the past year. What’s even more impressive is, collectively, they’re planning to create 350 more in the next 12 months.

Those already created have included 23 full-time positions for Leeds graduates. And in all, 110 of our students – from first year undergraduates to final year postgraduate researchers – having either conducted internships or placements or gained employment during this period.

Dr Stow added: “It’s been a truly inspiring first year, and we look forward to supporting our members to achieve this growth in jobs through the University’s fantastic talent pool.”