Sir Alan Langlands has been honoured during a special awards event. 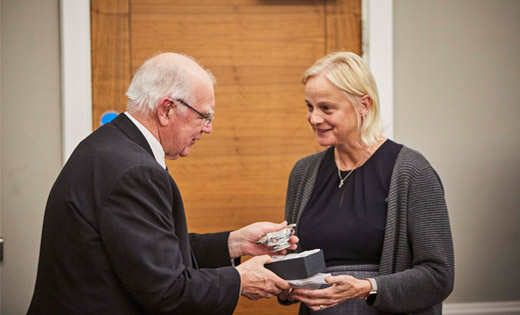 The Vice-Chancellor attended his last University Sports Scholars Awards on Thursday 14 November to present certificates to the latest cohort of recipients, formally inducting them into the scholarship programme.

During the ceremony, Sir Alan was presented with an honorary White Rose Award in recognition of his outstanding service during the past seven years. The accolade is given to those who have made an exceptional contribution to Sport during their time at Leeds, in social, performance, leadership, events or engagement roles.

This year, the programme includes 64 scholars studying a wide variety of courses, from Dentistry to Philosophy. It provides them with a personalised package of academic and athletic support, with 30 new scholars joining the programme in 2019. 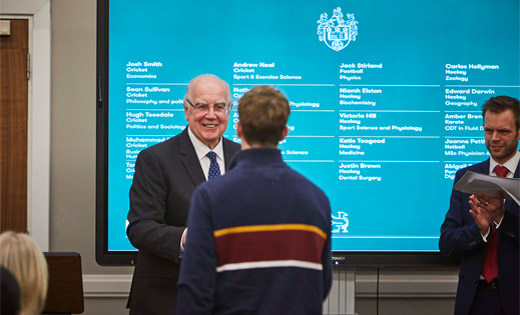 The evening inducted 30 new scholars into the programme

While the scholars may have been the stars of the evening, it was also an opportunity to show appreciation for the staff who deliver the coaching and support services that allow our athletes to flourish.

Josh De Silva, Lead Physiotherapist, and his team aim to keep the scholars performing at their peak through screening and injury prevention work, as well as rehabilitation and recovery programmes. Josh also manages a massage clinic each week, where scholars can access recovery support.

The Leeds Sport Strength and Conditioning service, led by Tim Jarrett and supported by Coach Ben Warman, provides a bespoke training programme for scholars, which aims to keep them in the best condition possible. With requirements ranging from rugby to climbing and canoe-polo, the team does a brilliant job in understanding their sport-specific needs and providing a high quality service.

The programme is also backed by a network of technical coaches, who support scholars in their sport whilst they are training and competing for the University. These teams are headed up by:

You can find out more about the success stories our sporting staff have helped to build by visiting the Sports & Physical Activity website.