Staff and students can hear a range of the finest classical and contemporary music right here on campus. 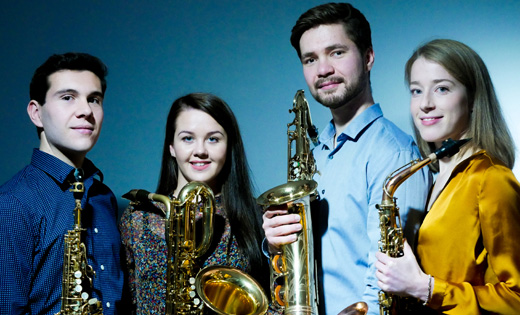 Concerts are directly related to the teaching and research outputs of the School of Music and other areas of the University. And many of them are free to attend.

The 2019-20 Series began with a special broadcast of BBC Radio 3’s In Tune live from Clothworkers Centenary Concert Hall, with performances by Leeds Lieder and Opera North musicians alongside students from the School of Music.

Other highlights of this season include a celebration of the work of Peter Warlock in his 125th birthday year, pianist Richard Uttley performing Brahms’ third piano sonata, a concert of contemporary cello music with Séverine Ballon and the Ebonit Saxophone Quartet.

We look forward to welcoming the Black Dyke Band back to the University in 2020, acknowledging the early works of Beethoven in his 250th birthday year, collaborating with Leeds Lieder with performances by Fatma Said and Nicky Spence, and celebrating the 30th anniversary of Friends of University Art of Music.

The remaining programme is outlined below. Admission is free, unless otherwise stated.

A Breath In Time

An opportunity to hear work by students on performance courses in the School of Music. Programme to be announced.

Celebrating the 125th birthday of the British composer, editor and music critic, Peter Warlock (1894-1930), this concert includes songs by Warlock and some of his contemporaries, along with examples of Warlock’s piano music and choral works. 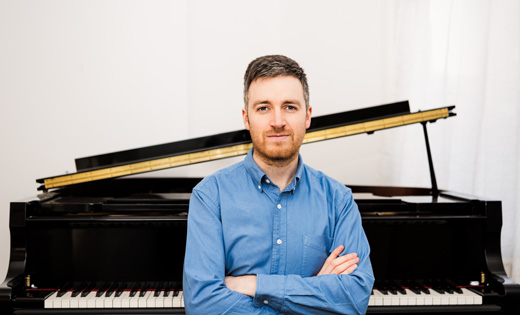 Noted for the integrity and breadth of his musicianship as soloist, chamber musician and recording artist, Richard Uttley, has been recognised for his “musical intelligence and pristine facility” (International Record Review), “amazing decisiveness” and “tumultuous performance” (Daily Telegraph). 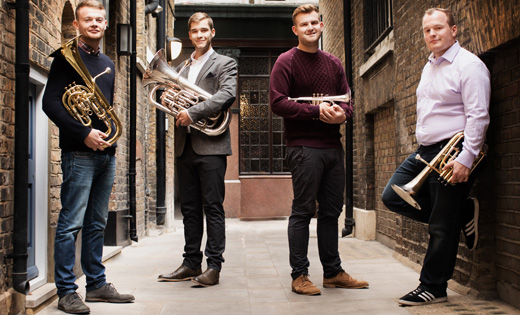 From Bach to Bates will be performed by A4 Brass Quartet

A4 Brass Quartet: From Bach to Bates

A4 Brass Quartet comprises of principal players from some of the UK’s top brass bands, including Brighouse & Rastrick and Foden’s. With “technical virtuosity in abundance” (Brass Band World), these four astonishing musicians come together to perform both lyrical and high-octane works, forming a distinctive and new take on chamber music.

Another opportunity to hear work by students on performance courses in the School of Music. Programme to be announced. 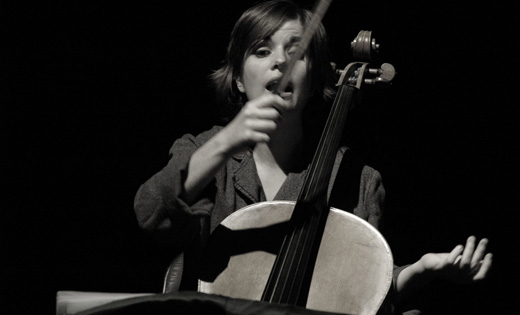 Séverine Ballon will perform a concert of contemporary cello music

Séverine Ballon‘s work focuses on regular performance of key works of the cello repertoire, as well as numerous collaborations with composers. In addition, her researches as an improviser have helped her to extend the sonic and technical resources of her instrument.

Film screening: The Fire of Olympus

The Fire Of Olympus or, On Sticking It To The Man, is a radical re-imagining of Greek mythology. An opera presented in film, it tells the legends of Prometheus and Pandora, and the theft of the secret of Fire from Zeus, the all-powerful President of Olympus, by prankster-led political activists. Resonant with and relevant to the modern world and contemporary issues, it is filled with drama, passion, politics, tragedy and comedy.

Prior to the screening, there will be a Q&A with a panel including composer Tim Benjamin, Radius Opera’s music director, Ellie Slorach, plus other special guests. 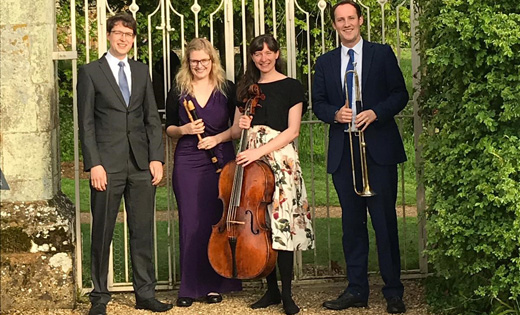 Clothworkers Consort of Leeds is joined by the early music group, Eboracum Baroque, and bass soloist, Stuart O’Hara, for a programme of music in celebration of St Cecilia’s Day

Welcome to all the Pleasures: Odes for St Cecilia's Day

The Clothworkers Consort of Leeds are joined by the early music group, Eboracum Baroque, and bass soloist, Stuart O’Hara, for a programme of music in celebration of St Cecilia’s Day. The concert will feature Henry Purcell’s trumpet sonata, his Cecilian ode Welcome to all the pleasures, and the modern premiere of William Norris’s Begin the noble song, written for a St Cecilia’s Day celebration in Lincoln in 1693.

The Ebonit Saxophone Quartet is a sparkling and inspired ensemble founded in 2011 at the Amsterdam Conservatory of Music. The four musicians from Poland, the Netherlands and Spain have quickly made themselves a name in the Netherlands and abroad, performing in major halls including the Concertgebouw in Amsterdam, De Singel in Antwerp, Musikverein in Vienna, Konzerthaus in Berlin and Liszt Academy Solti Hall in Budapest.

School of Music Choir and Orchestra

In the second half of the concert, the School of Music Orchestra, conducted by Christopher Pelly, present a programme of mid-century orchestral entertainments.

The Golden Thread: Music for Gamelan

The University of Leeds Gamelan Ensemble will perform a collection of tradition music, contemporary repertoire and new pieces on the School of Music’s Javanese Gamelan. This set of bronze gongs and metallophones, named The Gold Thread in reference to Leeds’ strong connections with the textile industry, was hand-crafted in the court city of Surakarta in Central Java 16 years ago. The ensemble is directed by Ángel Cataño Flores.

Ian Pace is a pianist of long-established reputation, specialising in the farthest reaches of musical modernism and transcendental virtuosity, as well as a writer and musicologist focusing on issues of performance, music and society and the avant-garde.

The acclaimed Opera North children’s Chorus and Young Voices are delighted to be back at the Clothworkers Centenary Concert Hall to celebrate Christmas! Get in the festive spirit, enjoy seasonal favourites and sing along to popular Christmas carols. A concert not to be missed, which will appeal to adults and children alike.

Tickets £8 for adults and £5 for children. 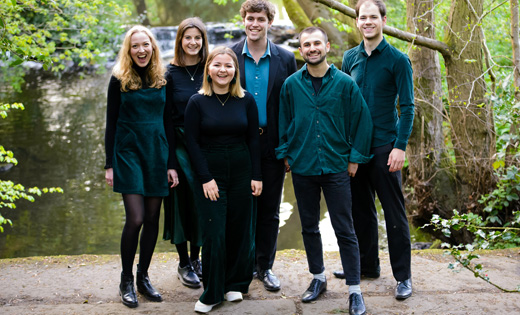 The Ladenses 6 are a vocal group who met during their studies at the University of Leeds. Having formed in September 2018, they have had a very successful first year of concerts. Their own events aim to bring choral music to a wider audience by choosing unique venues and creating a relaxed performance environment. Programme to include music by Palestrina, Rheinberger, Holst, MacMillan and Todd.

“When words leave off, music begins”, wrote the 19th century German poet, Heinrich Heine. No composer set Heine as magically as Schumann, and audiences have a rare chance to hear a complete performance of Robert Schumann’s Dichterliebe, the original 20 Heine songs, rather than the 16 usually given. Well-known and well-loved by audiences around the globe, Mark Padmore returns to Leeds on the back of an extraordinary season. Artist in Residence with the Berlin Philharmonic and Bayerische Rundfunk Orchestras, he was awarded a CBE this year and performs at all the major music centres. This recital also includes Britten’s rarely performed Scots songs, Who are these children?, alongside Mahler’s transcendental Rückert-Lieder.

Spanish Sun and Songs from Europe

Few artists have captured the hearts of Leeds audiences quite like Fatma Said, who gave one of the most enthusiastically received recitals of recent years at the 2019 Leeds Lieder Festival. A mixture of extraordinary vocal technique and oodles of charm and charisma, we are thrilled that she returns to Leeds so soon after her auspicious début. A favourite at La Scala in Milan and the Salzburg Festival, she has recently signed a major recording contract with Warner. Programme to include Robert Schumann, Johannes Brahms, Manuel de Falla and George Gershwin.

The Diary of One Who Disappeared

Reviewing his 2019 Leeds Lieder recital, the Sunday Times described Nicky Spence as a “tenor who combines heroic tone and a poetic sensibility that takes the breath away”. We are thrilled that he returns to Leeds with a repertoire he has very much made his own, and with regular duo-partner, Joseph Middleton.

Visit the Series website for further information and details of how to book tickets.