The first step has been taken in a £75m transformation project for Leeds University Business School (LUBS) and the School of Law. 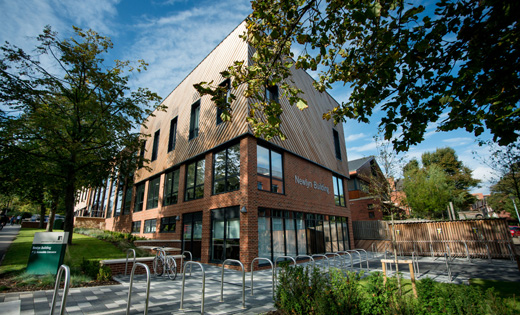 The Newlyn Building, which officially opened on Tuesday 8 October, is part of a broader investment programme on the western campus, embracing technology and innovation in new high-quality spaces and facilities.

Helping perform the official honours, Vice-Chancellor, Sir Alan Langlands, said: “This is the first important step in what will be landmark facilities for the University and the Business School.

“The investment is about pedagogy as well as bricks and mortar – the aim of this investment is to evolve teaching methods, finding new ways to transfer knowledge, encouraging students to collaborate and develop their skills.” 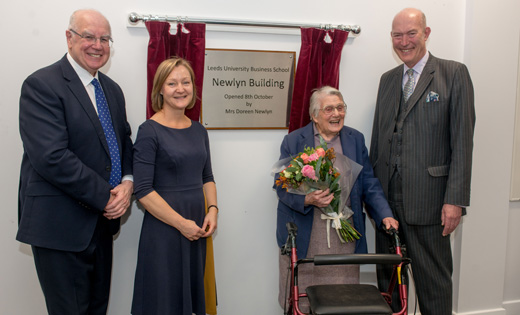 The opening ceremony was led by Sir Alan and Executive Dean of the Business School, Professor Peter Moizer. Special guests from Professor Newlyn’s family, including his widow, Doreen, were also welcomed to the event, where a memorial plaque was unveiled to mark the occasion.

Celebrating the work of Professor Newlyn, Sir Alan described him as: “A remarkable man with expertise in macroeconomics and monetary policy, which made an impact internationally in Africa, and more locally in Leeds and the UK.”

As part of his long and successful career at the University, Professor Newlyn established the Leeds University Centre for African Studies in 1964 and the subsequent MA Development Studies.

Reflecting on his impact, Professor Moizer said: “The School and the University are still benefitting from his influence as a talented and dedicated teacher and researcher.”

Professor Moizer also acknowledged the famous Newlyn-Phillips machine – a hydraulic computer of the UK economy, where water represents money flowing through the economy. LUBS displays one of the few models in existence, and Professor Moizer described it as “a wonderful, practical demonstration of the intricacies of a macro economy”.

View photos from the official opening. 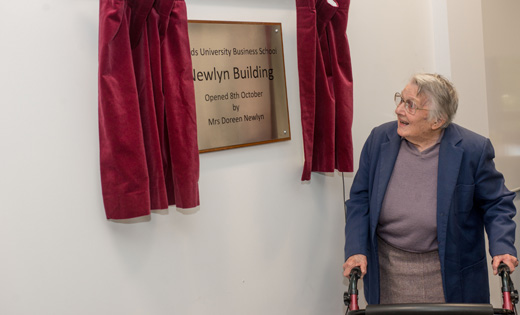 Doreen Newlyn unveils the plaque in memory of her husband, Professor Walter Newlyn

The life of Professor Newlyn

He said: “Walter was a truly remarkable man. He was shaped by the remarkable times in which he lived.”

Walter was born in 1915. His father was killed in the First World War and he had a modest upbringing with his mother in south London. Walter left school at an early age and became a junior office boy in a City firm. In the 1930s, he signed up for evening classes in economics and politics, developing firm left wing political views. In the late 1930s, he joined the Territorial Army, which led him to France as part of the British Expeditionary Force in the Second World War. Walter was one of the last troops to be evacuated from the beaches of Dunkirk.

After the war, Walter read Economics at London School of Economics (LSE). There he met Bill Phillips and together they devised the idea of the hydraulic machine. Phillips was an engineering genius and Newlyn provided the economic input.

Moving to Leeds, Professor Newlyn pioneered work in Economics and Development Studies, which led to several long-term assignments in Uganda and Nigeria and publications on money, banking and finance in developing countries. Equally, with his passion for the arts, Professor Newlyn led the campaign for the Leeds Playhouse with his wife, Doreen.

Visual displays of Professor Newlyn’s career can be found in the Newlyn Building. Special thanks to Dr Martin Carter and the Newlyn family in curating these murals.