The University of Birmingham hosted the Higher Education Technicians’ Summit 2019, a biennial event, attended by some of our technical staff from the University of Leeds.

Registration, coffee, networking (tea breaks) and lunch took place in a big outdoor marquee by the ‘Old Joe Clock Tower’ located around an area known as the ‘Aston Webb’. Access to the day’s proceedings involved darting to and from the main building! However, my fellow technicians, especially our hosts in Birmingham, maintained great resolve and determination to keep spirits high!

The purpose of the event? Here is an extract from Professor Sir David Eastwood, in the HETS program guide, ‘Celebrating the achievements of technicians, and the vital role technicians’ play in education’. The summit ‘builds upon our first two hugely successful meetings held at Nottingham in 2015 and Warwick in 2017’.

In the morning, some of us signed up for the workshop/session on ‘Implementing the Technician Commitment – From the Good, the Bad and the Ugly to The Magnificent Seven’. My group worked on improving ‘Visibility’ with contributions from technicians at Manchester Metropolitan University, Keele University, Cambridge and others, all of whom had quite animated discussions about ways to do just that! 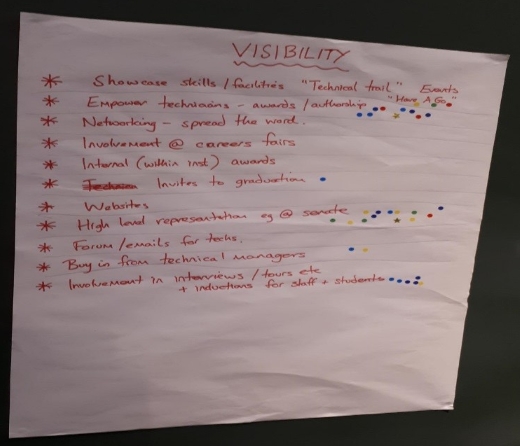 Our hosts had carefully thought through the lunch provision, with special arrangements for those of us following restricted diets. This also made an excellent opportunity to network with our fellow technicians, many of whom had travelled from as far afield as Edinburgh and Portsmouth to meet in Birmingham for HETS. The rain eventually eased off and by then some of us had nearly dried out!

The afternoon session included a short talk by Professor Alice Roberts and the presentation of awards for recognition in Research, Teaching, Core Research Facility, Infrastructure, Outreach, Technical Team, Professor Lord Bhattacharyya – Lifetime Achievement Award for Technical Excellence, and Best Newcomer (Not necessarily in that order). The many Papin Prizes received many rounds of applause! The programme for the day ended and we made our way home.

If you can make it, then I look forward to seeing you at HETS 2021!