Stuck between a Brokk and a hard place!

When it comes to roguish robots, we think we’ve got something to give Disney’s WALL-E or R2-D2 from Star Wars a run for their money!

Automated robot, Brokk, sets about demolishing a wall, as part of the Language Centre refurbishment project 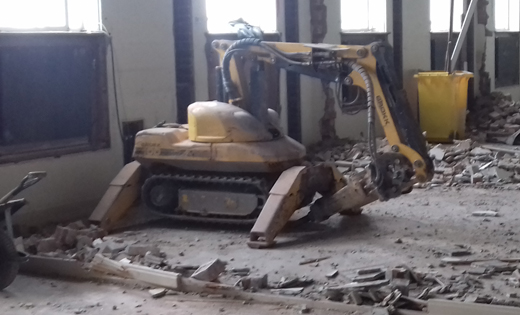 Meet Brokk, the demolition robot. And if that’s not cute enough, there’s the chip off the old metal block, Baby Brokk!

Contractor Overbury employed the destruction duo as part of £5m refurbishment works for the Language Centre, based in the Parkinson Building.

And the results have been, well, smashing! Even Wreck It Ralph can’t crack it like these bad boys!

It was a case of ‘wall or nothing’ as the automated technology tackled the toughest of tasks, improving efficiency while saving both time and money in the process.

“It has speeded up the demolition work and the robotic technology has improved efficiency on repeatable tasks.” 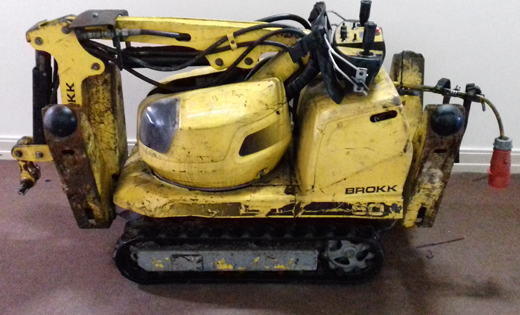 Josh Donnelly, Senior Project Manager at Overbury, added: “Using Brokk is beneficial from a health and safety perspective as it reduces manual labour and exposure to HAVs (hand-arm vibration syndrome) for our operatives. That alone made its use worthwhile.

“Secondly, the walls here in the Parkinson Building, where the Language Centre is located, are more than half-a-metre thick and constructed in robust brickwork. We think Brokk completed the demolition works about four times quicker than manual labour would have.

“As all noisy works were undertaken out of hours in the building, there was also a major time and cost benefit associated with using Brokk that we could bring to the University. It has been a real success of the project so far.”