More than 280 people attended a series of six events to celebrate three years of the Priestley International Centre for Climate and the official opening of its new home – the Priestley Building. 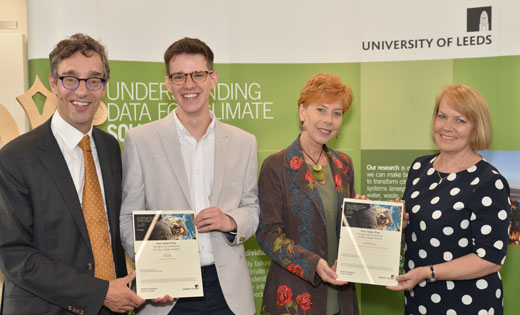 A packed lecture theatre was treated to fascinating presentations from both prize-winners: Leeds postgraduate researcher, Tom Slater; and Professor Petra Tschackert, from the University of Western Australia.

From Tom, who works in the NERC-funded Centre for Polar Observation and Modelling in the School of Earth and Environment, we learnt that Antarctica has lost three trillion tonnes of ice during the past 25 years. Astonishingly, 40% of this has occurred between 2012 and 2017 – a threefold increase in the rate of ice loss.

Petra delivered a compelling case for the role of social sciences to ensure justice in the Anthropocene – the current geological age, viewed as the period during which human activity has been the dominant influence on climate and the environment. She called for us to recognise what we have in common, how we are connected and cultivate an ethics of empathy.

Watch the video of the Piers Sellers Prize-giving. 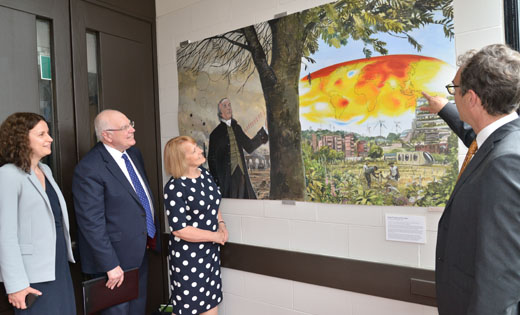 A gathering of more than 90 guests from across all Faculties watched as the building plaque was revealed. Specially commissioned artwork, photography and examples of work by Priestley Centre researchers were on display, demonstrating the cross-disciplinary nature of activities taking place in the Priestley Building. 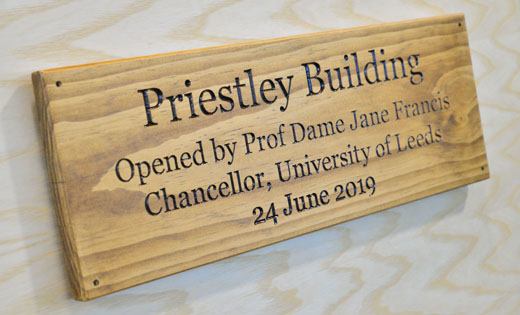 During a later seminar, Petra shared candid insights from her experience as a social scientist on the Intergovernmental Panel for Climate Change (IPCC). Balancing the highs of reaching a breakthrough agreement after working through the night, and the lows of working across multiple time zones, it became clear that the role of an IPCC author is both challenging and rewarding.

Another event saw a delighted audience taken on a whistle-stop tour through the life and times of Joseph Priestley, wonderfully delivered by Dr John Lydon, Secretary of the Leeds Philosophical and Literary Society. Discoverer of dephlogisticated air (what we now know as oxygen), accidental inventor of the rubber and friend of the earliest presidents of the United States of America, Priestley makes for a fascinating namesake.

Watch the video of the Joseph Priestley lecture.

The programme of events took a funny turn when comedian, Gemma Arrowsmith, visited campus to talk about comedy and climate change. Can you make jokes about climate change? Can it help to reach a wider audience? Well, yes, as it turns out.

After some robust theory and hilarious sketches, audience members were all in agreement that climate change comedy should feature much more on our television screens.

The Priestley Climate Scholars rounded off the week of events, showcasing the breadth of climate research that takes place at Leeds: from statistical scaling of sea surface temperature, to public acceptance of renewable energy, power from hydrogen and youth participation in climate governance. The Scholars are the leading climate researchers of the future, so watch this space!

Director of the Priestley International Centre for Climate, Professor Piers Forster, said: “Not only was this week of events a celebration of the exceptional climate research that has been taking place across campus, but also laid the foundations for future interdisciplinary collaborations necessary to develop essential climate solutions. Many thanks to everyone who joined us!”