Leading figures from the worlds of science, the arts and industry will be the recipients of honorary degrees from Leeds next month. 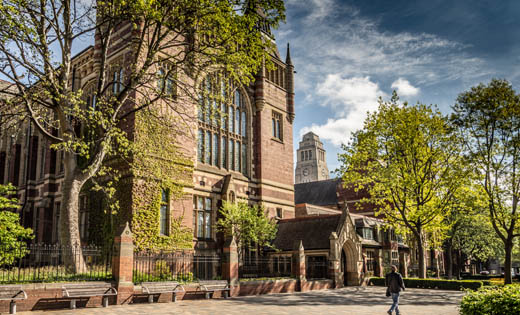 Alongside the thousands of undergraduates receiving their degrees during graduation fortnight, starting on Monday 15 July, six individuals will be honoured with one of higher education’s most prestigious awards.

The ceremonies will take place in the Great Hall.

This year’s honorary graduands are:

A Leeds graduate, Peter Dhillon is an outstanding business leader and champion of business ethics. Alongside his late father, he built a lucrative cranberry business, and is active in several enterprises, currently serving as the CEO of the Richberry Group, and as the youngest and first Canadian Chair of the Board of Directors of Ocean Spray Cranberries Ltd.

Peter has recently partnered with the University of British Columbia to establish a Centre for Business Ethics, which promotes a leadership vision that he has embodied throughout his career and through his philanthropic and charitable service. His many contributions and achievements have been honoured in his country (Canada) by the award of the Order of British Columbia and the Queen’s Diamond Jubilee medal.

After graduating from Leeds, Jane pursued a career in television, working on a number of high-profile drama series before joining the renowned independent producer Hat Trick, where she worked on popular comedy shows Whose Line Is It Anyway, Have I Got News For You and Drop The Dead Donkey.

She joined independent film company Kudos in 2000 as Head of Drama, becoming Creative Director in 2008 and Chief Executive in 2011, and was the Executive Producer on some of the most innovative and ground-breaking dramas of the period, including Spooks, Broadchurch and Life On Mars.

In November 2015, Jane founded Sister Pictures – an independent television production company that specialises in bold and distinctive stories for UK and international audiences.

Dr Richard Henderson is a biophysicist and molecular biologist, who was the first to successfully produce a three-dimensional image of a biological molecule at atomic resolution using a technique known as cryo-electron microscopy, for which he was awarded the Nobel Prize in Chemistry in 2017.

Awarded the prestigious Turner Prize in 2017, Professor Lubaina Himid is fêted across Europe with a series of exhibitions that indicate the status she has achieved as both a major British artist and as an artist speaking to the complex histories of Europe’s relation to Africa and African peoples.

An inspiring teacher, Professor Himid has used art to provoke us to think through the burdens of dark histories and resilience of cultural resistance; she has worked tirelessly to sustain artists, to develop emerging artists and to teach those still aspiring to this practice.

Professor Sir Michael Pepper is Pender Professor of Nanoelectronics at University College London. He is known for his pioneering, original and revolutionary achievements on the fundamental and applied physics of advanced semiconductor structures, with applications in emerging quantum technologies, industrial processes and medicine.

His work has transformed an extremely important part of condensed matter physics, creating the entirely new fields of mesoscopic physics and low-dimensional electronic systems. His eminence and the impact of his achievements was recognised by the Royal Society awarding him its Royal Medal in 2005.

An alumnus of Roundhay School, Professor Sir Norman Williams heads the Centre for Academic Surgery at Queen Mary, University of London. He is a former President of the Royal College of Surgeons of England and former Director of the National Institute for Health Research Enteric and National Bowel Research Centre.

He was knighted in the 2015 New Year Honours and he was appointed clinical adviser to the Secretary of State for Health in October 2015. He recently chaired a policy review looking at gross negligence manslaughter in healthcare, bringing forward recommendations to create a stronger culture of learning within the NHS.