Inside the revamped Priestley Building following a 13-month works programme 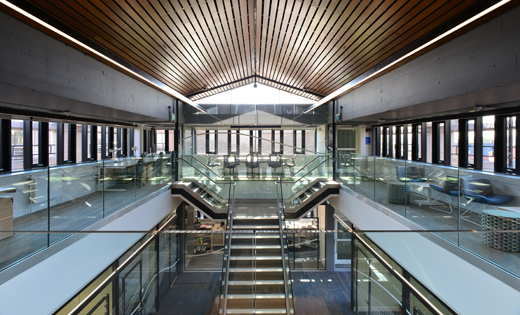 Chancellor, Professor Dame Jane Francis, and Vice-Chancellor, Sir Alan Langlands, will perform the official honours on Monday 24 June, to be followed by a drinks reception.

You can register to attend the event, which takes place from 4-5pm on Level 10 of the Priestley Building.

And not only are colleagues invited to attend the ceremony, they are also encouraged to become members of the Priestley Centre.

With a focus on solutions-based interdisciplinary climate research, the Priestley Centre facilitates collaboration both across campus and with international colleagues.

Named after inspirational Yorkshire scientist, Joseph Priestley (1733-1804), who made fundamental discoveries necessary to understand climate change, the centre has specially commissioned artwork commemorating his life and work, which will be unveiled at the opening.

The Priestley Centre's new meeting rooms are to be named after leading climate change influencers – climate scientist, Katharine Hayhoe, and diplomat, Christiana Figueres. Katharine Hayhoe has made it her mission to effectively communicate about climate change with disengaged and doubtful groups around the world, while Christiana Figueres is regarded as one of the main architects behind the Paris Agreement, particularly for getting rich and poor nations and the young and old together to affect positive change.

The Chancellor said: “The complexity of the climate challenge demands a broad array of ambitious solutions. The new Priestley Building offers a fantastic environment in which to expand the interdisciplinary collaborations necessary to develop the solutions.”

Major works at the Priestley Building during the past 13 months have seen the existing undercroft area and Level 10 of the listed structure converted into modern premises for the Priestley Centre and parts of the School of Earth and Environment (SEE).

The new space will enable the Priestley Centre to grow and build on its reputation, providing offices for academic chairs, University Academic Fellowships, PhD students and administrative support staff. The airy, open-plan design of Level 10 provides vibrant interdisciplinary meeting and tutorial space, which will be used to host academic visitors and external partners, strengthening partnerships and executive education opportunities.

Professor Piers Forster, Priestley Centre Director and climate scientist on the Committee on Climate Change, said: “This new dedicated space will help take the centre to the next level, attracting the brightest and best students and staff from around the world to work with the great minds already working on climate solutions across the University.”

Priestley academics are already at the forefront of international climate research.

Eight researchers, which include Professor Forster and three Priestley chairs, are contributing to the Intergovernmental Panel on Climate Change (IPCC) Sixth Assessment Report – the next comprehensive assessment of the science relating to climate change, which is used to inform policymakers, international climate negotiators and other stakeholders.

More recently, a report including expertise from Leeds climate researchers underpinned the UK Committee on Climate Change report, which has led to the groundbreaking commitment from the UK government to reduce greenhouse gas emissions to net zero by 2050.

The official opening forms part of a week-long programme of activities, including: