Scholarships open a world of opportunity

A campaign has been launched to encourage Leeds alumni and other supporters to join the thousands of people whose generosity benefits so many of our students.

Megan Barnes and Ben Kew, who both benefitted from the support of a scholarship to study at Leeds 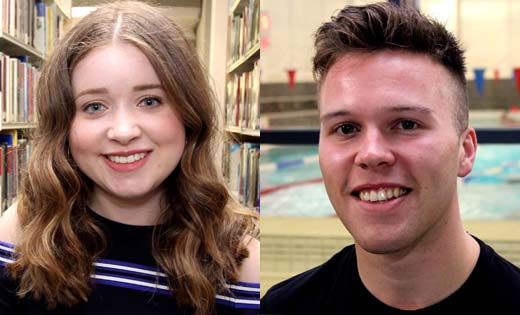 Ben Kew and Megan Barnes are the public faces of an Alumni and Development Team campaign to demonstrate the benefits of scholarships.

“I was obese as a teenager,” says Ben Kew, looking back at a difficult time in his life, when he was forced to move out of the family home and sleep on friends’ sofas during his A-levels.

Even so, he achieved stellar grades – two A-stars and three As – which enabled him to fulfil his dream of enrolling to study food science at Leeds.

From a young age, Megan Barnes was a carer for her mum, whose back pain limited her own movement and impacted on what they could do as a family. Yet despite attending a school where few students progressed to higher education, Megan developed a passion for geography – and by the age of 14 had set her heart on a place at Leeds.

For both Ben and Megan, the support of a scholarship, funded by University donors, was critical to being able to take advantage of all the opportunities available on campus.

“I was determined to fall in love with a sport,” says Ben, who joined The Edge and took up swimming. This once overweight teenager progressed to become a member of the LUU swimming squad, a coach, and is now in the running to captain the team when he embarks on a PhD in Food Science next year.

Megan says the scholarship eased her money worries about studying at Leeds, has helped to pay for books and research materials and enabled her to join a field course in New Zealand next year.

Both Ben and Megan have made videos explaining how scholarships have helped to change their lives.

See the Student Scholarships webpages to watch their films, learn more about the impact of scholarships and find out how you could help.