Taking science out of the lab and into the pub

Tickets are on sale for the world’s largest festival of public science talks that will see more than 50 Leeds academics take to the stage in pubs across the city. 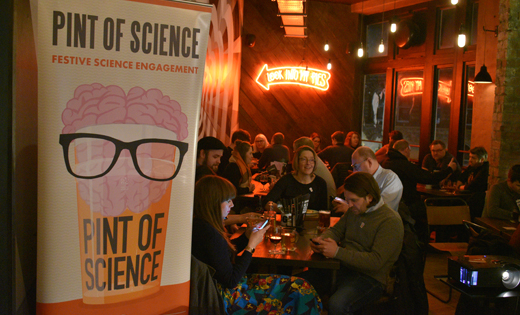 Leeds will be one of 300 cities around the world taking part in the Pint Of Science Festival. Tickets and a full guide to the event are available via the official website.

Founded seven years ago by two UK researchers, the festival features a unique line-up of talks, demonstrations and live experiments between Monday May 20 and Wednesday May 22.

Researchers from the Universities of Leeds and Leeds Beckett, together with local businesses, will be speaking in the city’s pubs on topics including:

Alongside the main talks, each evening will also include a range of fun and science-related activities, including live experiments and science demonstrations.

Venues include The Adelphi in Sheaf Street and the Belgrave Music Hall and Canteen – all close to the city centre.

This year's theme is ‘What Next?’ as researchers consider the big questions facing science today.

James Miley, PhD researcher and joint coordinator of the Leeds events, said: “Pint of Science returns to Leeds with another fantastic line-up of events that cover a broader range of amazing research than we have ever seen before.

“Over a pint, the public can learn about how science is shaping our future. It’s the best science lesson ever!”

This year, Leeds Pint of Science will be followed by Creative Reactions – a one-off event where artists and scientists work together to create incredible artworks inspired by research.

Alice Booth, joint coordinator of Leeds Pint of Science, said: “It is a really exciting opportunity to explore the interface between cutting-edge science and the creative arts. Most people treat these two things as chalk and cheese, when in fact there are many cases where the two complement each other.”