Organisers of the first ever first-class fixture at Sports Park Weetwood were bowled over by the success of the event.

There was a real sense of pride and excitement in the air as the teams took to the field. The pitch looked fantastic – a result of all the ground staff’s hard work in the week leading up to the event – and although there was a chill in the air, there was a great turnout of spectators enjoying a cuppa whilst watching the top class action on the field.

The fixture was one of three three-day matches against county teams for Leeds-Bradford MCCU. They began their season against Derbyshire and have since played Warwickshire at Edgbaston.

It was a privilege for Weetwood to host such a high-profile event – a fantastic opportunity to highlight the MCCU programme and for any prospective students who may be interested in playing cricket at Leeds to meet members of the team. 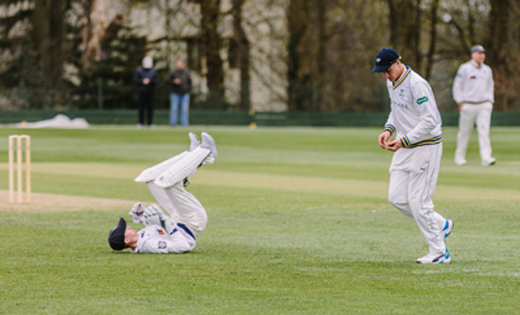 The match between Leeds-Bradford MCCU and Yorkshire was a big success.

Established in 2001, MCCUs are cricket academies that allow young, aspiring cricketers to receive an unrivalled level of training and match-play whilst still furthering their education. They provide a pathway into first class county cricket and, ultimately, international honours, with about a fifth of all English qualified players having been part of an MCCU centre of excellence.

Despite losing, the Leeds-Bradford MCCU team competed well against one of the strongest county sides in English cricket.

Head of Sport, Suzanne Glavin, said: “A huge thank you to Richard Robinson and his grounds staff and Gawaine Mackenzie-Hogg and his operational team at Sports Park Weetwood, who made the staging of this important fixture for our University such a success.

"With excellent outdoor sports provision and a focus on customer service excellence, Sports Park Weetwood is rapidly becoming the venue of choice for many sporting fixtures and performance training camps.

"Good luck to our Head of Cricket, Andrew Lawson, and our academy student players for the rest of the season.”