Leading climate change influencers, Christiana Figueres and Katharine Hayhoe, who have had rooms in the Priestley International Centre for Climate named after them 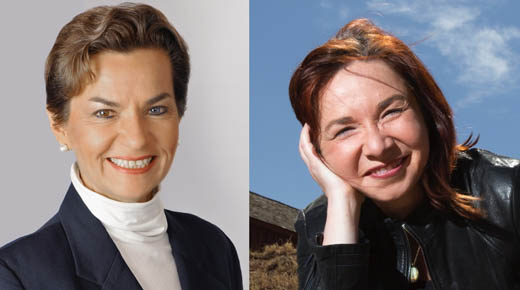 The honour was bestowed on climate scientist Katharine Hayhoe and diplomat Christiana Figueres, whose names will now adorn the rooms in the Priestley International Centre for Climate.

The announcement was made on International Women’s Day (8 March 2019) after Centre members submitted nominations for women that have been influential in addressing climate change.

Priestley Centre Director, Professor Piers Forster, said: “Our Centre is named after Joseph Priestley (1733-1804) – a brilliant male scientist, who made the fundamental discoveries necessary to understand climate change. But this only tells part of the story of why our Centre is here and why people around the world are taking action today.

“Interdisciplinary teams of people are taking the research in new directions. Just as important as the research are the influencers that take this research and use it to change our world for the better.

“We wanted to acknowledge these crucial roles by naming our two new meeting rooms after the world’s best climate influencers. It is fitting that Katharine Hayhoe and Christiana Figueres swept the field before them – both have excelled in translating the science for hard-to-reach demographics with a huge sense of optimism for the future.

“Katharine Hayhoe, a top climate scientist, has made it her mission to have a respectful conversation with sceptical and conservative groups around the world. Christiana Figueres is regarded as one of the main architects behind the Paris Agreement, particularly for getting rich and poor nations and the young and old together to affect positive change.

“My hope is the conversations that take place in the Hayhoe and Figueres rooms can be just as inspiring, and build on their achievements to create a climate-resilient 21st century society that works for all.”

Katharine Hayhoe, responding on Twitter, said: “Wow, what fantastic company! Thank you so much, I am incredibly honoured – this is a first for me!”

Christiana Figueres said: “I am deeply moved by this thought and I am thrilled for you to have a Figueres Room.”

The Priestley Centre is hoping to arrange a visit from Katharine Hayhoe when she travels to the UK next year.