A leading University academic has been awarded a scientific heirloom by a peer at the Engineering and Physical Sciences Suffrage Science Awards.

Dr Sarah Harris and one of the jewellery 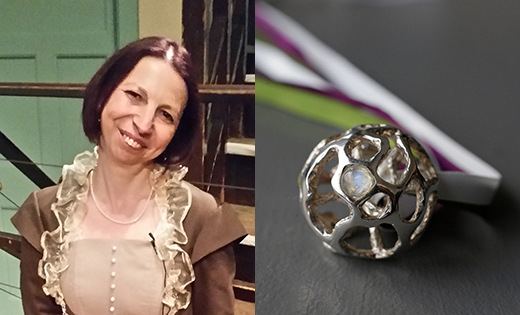 On International Women’s Day (Friday 8 March 2019), Dr Sarah Harris, of the Astbury Centre for Structural Molecular Biology and the School of Physics and Astronomy, is one of the 12 female scientists and engineers from across the world who will be presented with hand-crafted jewellery at the Suffrage Science Awards ceremony, held at The Royal Society in London. The awards celebrate women in science and engineering and encourage others to enter science and reach senior leadership roles.

The 12 awardees were chosen by the previous award holders for their scientific achievements and ability to inspire others. Dr Harris was nominated by Dr Sarah Staniland from the University of Sheffield.

Dr Staniland said: “I nominated Sarah because she is not trying to be a leader or spend all her time doing purposeful ‘women in science’ work, but simply because she is just unashamedly herself.

“When I first got my job at Leeds, I had had my confidence knocked. I was told as feedback from a failed job interview before that I ‘lacked gravitas’. So, it was clear to me I needed to try to be like a stuffy old male academic to gain gravitas and get ahead in academia when I started my first permanent academic job in Leeds.

“Then I met Sarah and she was completely the opposite! She made me realise: ‘No, I don't want gravitas, I want to be good at what I do and the confidence to be myself, just like Sarah’. She stopped me going down a completely wrong track, for which I am eternally grateful.”

The awards themselves are items of jewellery, inspired by the Suffrage movement, and Dr Staniland will pass on the jewellery as an heirloom to Dr Harris. The jewellery was created by art students from Central Saint Martins, who worked with scientists to design pieces inspired by research and the Suffragette movement, from which the award scheme takes its name.

Dr Harris said: “I am very grateful for this award. It gives me the opportunity to share my personal experience of the benefits of having an inclusive mind in science.

“I am a theoretical physicist, who strives to understand biology at the molecular level. My research has taught me that listening to diverse ideas and opinions is vital to discovery. It can be hard, but when you start to overcome barriers of language and culture, then it really is fun.”

The Suffrage Science scheme was initiated by Professor Dame Amanda Fisher, Director of the MRC London Institute of Medical Sciences (LMS), in 2011.

Amanda said: “Now in its eighth year, these heirlooms create a self-perpetuating network of talent and contacts to help others succeed in science and engineering. This year’s awardees join a community of more than 120 women scientists.

“Since 2011, the awards have travelled from the UK, across Europe to the USA, Hong Kong and to Uganda, illustrating the international nature of science and engineering, and the global effort to improve female representation.”

RT @ResDevLeeds: Nominations close for our Research Culture and Engaged for Impact awards on June 1st, don't miss this opportunity to get r…

RT @UniLeedsODPL: Check out our new webpage for academic personal tutoring support - it provides a hub of key information and resources, in…