First 100 Years of Women in Law

A new exhibition at the School of Law celebrates the first 100 years of women in law. 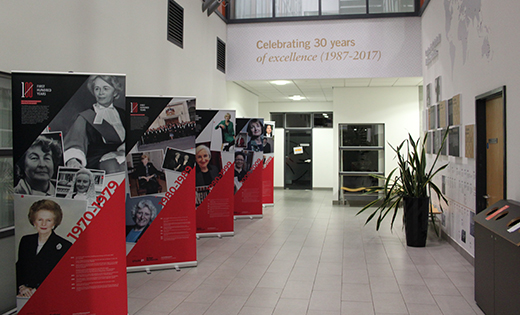 To mark the centenary of the Sex Disqualification (Removal) Act 1919, which removed the bar on women entering the legal profession, the School of Law is hosting a First 100 Years Exhibition.

The exhibition, which was previously at the Supreme Court, charts the journey of women in law since 1919, and is kindly on loan from the First 100 Years Project, a ground-breaking history project, supported by the Law Society, the Bar Council and CILEx. The project aims to celebrate, inform and inspire future generations of women in the profession.

It sets out a series of firsts that women have achieved since 1919, including:

Joan Loughrey, Professor of Law, said: “The exhibition captures how far women have come in the first 100 years and shows that they can and will overcome the challenges that still remain for women’s progression in the legal profession.”

The exhibition runs until 20 February 2019 at the Liberty Building atrium.

RT @UniversityLeeds: Investment company @NorthGritstone, co-founded by the University alongside @OfficialUoM and @sheffielduni, has announc…

Have you entered our exciting new awards scheme? Prizes, funding and an invitation to a special awards ceremony a… t.co/VoJH7J7jKb