Nominations have opened to select the Staff Festival 2019 chosen charity.

Pepper, one of the Pets As Therapy dogs that visits campus 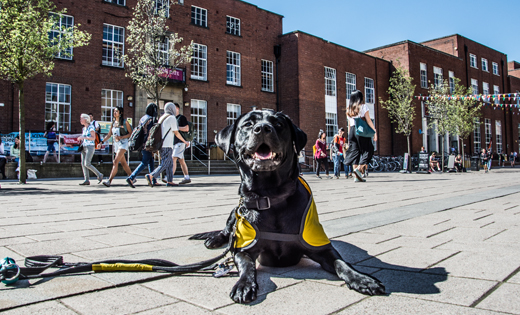 Plans are in full swing for this year’s exciting instalment of the hugely popular entertainment extravaganza, with a packed programme featuring workshops, refreshments, entertainment and competitions suitable for all ages.

All colleagues, family and friends are invited to join us on campus on Friday 28 June 2019 for an enjoyable afternoon of activities, full details of which will be announced nearer the date.

And you are also invited to nominate this year's chosen charity, which will receive the proceeds from the event.

This is your chance to nominate a charity for 2019 that fits the following criteria:

Nominations can be emailed to the Staff Festival team, who can also send out hard copy forms, if required.

Voting to select the winning entry opens on Monday 4 March 2019 and closes at 5pm on Friday 29 March 2019 (more details to follow).

The winning charity will be announced at the Staff Benefits Fair on Tuesday 2 April 2019.

Charity coffers will be further boosted with the proceeds of a book sale at the LOGIK Centre, 5-7 Lifton Place, which runs until Tuesday 12 February 2019.

The Centre is open from 9am to 5.30pm Monday to Thursday and 9am to 4pm on Friday for you to browse the book selection.