Celebrating a century of women in the legal profession

Tickets are going fast to see the country’s most senior judge give a public lecture on campus honouring the achievements of a pioneering Yorkshire MP.

Lady Hale, who will be delivering the Alice Bacon Lecture 2019 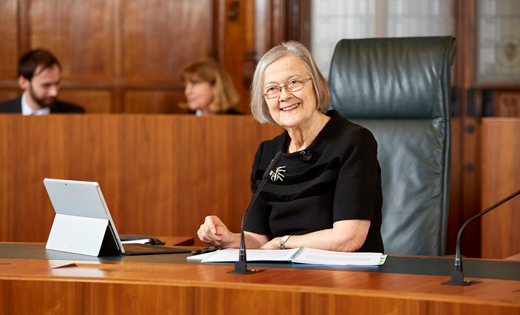 The Rt Hon Baroness Brenda Hale – the UK’s first woman law lord and the first female president of the Supreme Court – will talk at the University about A Century of Women’s Rights.

2019 marks the centenary of women being able to join the legal profession and hold public office. The Sex Disqualification (Removal) Act 1919 paved the way for women to become lawyers for the first time.

Last January, the inaugural Alice Bacon Lecture – held to honour Yorkshire’s first woman MP – was given by senior MP Harriet Harman in a packed Great Hall. The next lecture will take place at the same venue on Thursday 10 January 2019.

No stranger to firsts herself, Leeds-born Lady Hale, who grew up in Richmond, North Yorkshire – her full title is Baroness Hale of Richmond – was the first from her school to attend Cambridge University and the first to read law. She was also the first woman member of the Law Commission and the first female law lord (predecessors of the justices of the Supreme Court).

She said: “Women in my generation could often be first – it’s much harder now for women to be the first at anything because we’ve nabbed all of those spots.

“I feel a responsibility to be as good as I possibly can be in the job, partly not to let down women in the future – because there’s a risk if the first woman doesn’t do too well people will say ‘that’s because she’s a woman’.

“I also feel that, if my having this role encourages young women starting out in a legal career to think ‘well, if she can do it, I can do it’, that’s wonderful.”

Tickets for the free event, which can be booked via Eventbrite, are being snapped up fast. Starting at 6pm, the lecture will be followed by a drinks reception.

Alice Bacon was elected to represent Leeds North East in 1945 and served her city constituents continuously until her retirement a quarter-of-a-century later (she transferred to Leeds South East when constituency boundaries were revised in 1955). Awarded a CBE in the 1953 Coronation Honours, she took up a seat in the Lords as a Baroness on her retirement as an MP in 1970.

Leeds did not return another woman to the Commons until the election in 2010 of Leeds West MP Rachel Reeves, who is also Baroness Bacon’s biographer.

Ms Reeves teamed up with the University’s School of Politics and International Studies to establish the lectures in the name of her trailblazing forebear, with the aim of commemorating the achievements of West Yorkshire women – locally and nationally.

Ms Reeves said: “It is an incredible honour to host Baroness Brenda Hale – the first female president of the Supreme Court – to hear her perspective of social and legal changes pioneered by women during the past century.”

Cristina Leston-Bandeira, Professor of Politics at Leeds, added: “We very much look forward to welcoming such a high profile and inspiring senior judge as Lady Hale to give our students and others the opportunity to hear about women’s role in the legal profession during the past century.

“British politics and representation form a significant strand of research and teaching for staff and students in the School of Politics and International Students here at Leeds, as exemplified in the recent inauguration of our Centre for Democratic Engagement.

“The School hosts regular talks by eminent politicians, such as Leader of the Opposition Jeremy Corbyn; Speaker of the House of Commons, John Bercow MP; and Mother of the House, Harriet Harman MP.”

Nominations for the Leeds Partnership Awards 2022 are now open! Celebrate the achievements of staff and students… t.co/168FMp6KhH

💉 Find out how you can book a COVID-19 booster jab or a first dose of the vaccine at a new vaccination centre near… t.co/ffh6Vdmkak