A University Professor has been appointed to the Committee on Climate Change and will help to shape environmental legislation and policy. 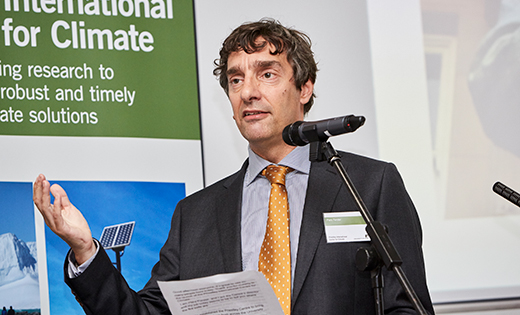 Professor Piers Forster, Director of the Priestley International Centre for Climate and Professor of Physical Climate Change, takes up the post of climate scientist on the Committee for a five-year term.

The Climate Change Act 2008 made the UK the first country to establish a long-term legally binding framework to cut carbon emissions. The Committee on Climate Change was established under this act as an independent body of experts to advise the UK Government on emissions targets and report to Parliament on progress made in reducing greenhouse gas emissions and preparing for climate change.

Commenting on Professor Forster's appointment, Lord Deben, Chairman of the Committee on Climate Change, said: “I am absolutely delighted to welcome Piers Forster to the Committee. His exceptional experience in climate research and analysis – including at the very highest levels of the IPCC – will be extremely valuable, particularly as we prepare to deliver a major report to Government on the UK’s long-term climate change targets."

Professor Forster said: “I am thrilled to be taking up this post on the 10th anniversary of the UK’s Climate Change Act.

“The Act and the Committee have done a great job in helping the UK establish itself as a world leader in reducing emissions. However, the challenging ‘teenage years’ are just around the corner and the Committee has some important work to do on long term targets and evidence based solutions that, if we get it right, will help the transition to a zero-carbon UK.

“Although climate change is a global problem, many of its solutions need to be implemented at a local level, and I am keen to learn best practice from the cities, rural communities and businesses of the UK. I can’t wait to roll up my sleeves and get started.”

As well as his research career, he established the forest protection and research charity, the United Bank of Carbon and has a number of roles advising industry, including membership of the Rolls Royce Environment Advisory Board.