The Peregrines of Parkinson Tower: Conservation Success at the University of Leeds.

This year, for the first time ever, two peregrine falcons nested on Parkinson tower and successfully raised three healthy chicks. 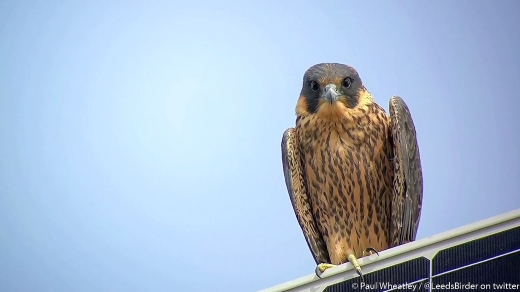 From atop one of Leeds' many concrete towers, a flash of grey rolls into a steep dive; descending at speed and striking with precision, it kills its prey instantly. Moments later, a devoted mother returns to her young - a much needed meal clutched between her talons.

There have been sightings of peregrine falcons in Leeds since the 1980s, just as the UK’s population was recovering from the devastating effects of agricultural pesticides, but it’s only within the last 4-5 years that individuals have taken up permanent residence in the city. Two years ago a pair nested, but only a single egg was laid that never hatched. Then last year there were reports of mating behaviour, but no eggs were seen. This summer however, after many years of waiting, we saw our first peregrine chicks. The birds were watched by many on the sustainability nest-cam, but to learn more about the development of the chicks I spoke to those involved.

Les Arkless (Twitter: @UoLPeregrines), an engineering technician who has followed these birds for years, explained how staff from across the University contributed to the peregrines’ success. The University Sustainability Service initiated the project (headed by Michael Howroyd) and arranged with the University Estates team for a nest box to be constructed which, under Les’ recommendation, was installed on the east face of the Parkinson Building tower. The nest-cam was also set up by the Sustainability Service to monitor the birds. All that could be done next, was to wait and see if the peregrines would accept the offering. 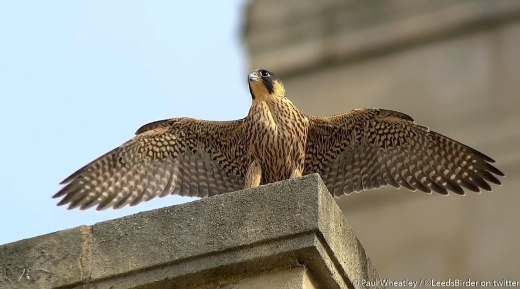 Peregrine falcons generally nest in March or April, so when no nesting behaviour had been seen by the start of May, it was thought to be too late. However, on the 7th May a single egg was spotted on the nest-cam, with two more laid over the next two days. A month of apprehension ensued and eventually on the 10th June, they started to hatch. The University of Leeds finally had its first peregrine chicks. For the next six weeks, Leeds’ pigeon population lived in fear as the parents set to feeding the insatiable chicks. The white bundles of feathers slowly turned grey as their flight feathers developed along with their formidable talons and beaks. 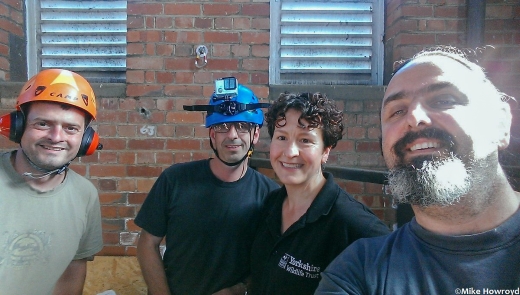 17 days after first hatching the Parkinson tower was scaled and the chicks were ringed to aid future monitoring.

Paul Wheatley (Twitter: @leedsbirder) witnessed much of the birds’ development first hand, observing and filming them as they grew. He told me about the eventful 48 hour period in which the chicks fledged. The first chick left the nest on the 23rd July, and Paul watched on as mother and son flew side by side, calling out to each other as they shared in the triumph of a successful first flight. The female who fledged next didn’t have quite the same success. In her first and second attempts to fly, she tumbled to the ground. Paul was there both times, and was the only one on hand to get her back to safety. With the help of a few other pairs of hands, a phone call to a local expert, the University Security team and a police escort, he carefully placed her into a cardboard box (that Les had prepared for this eventuality) and released her onto the roof of the Parkinson Building. 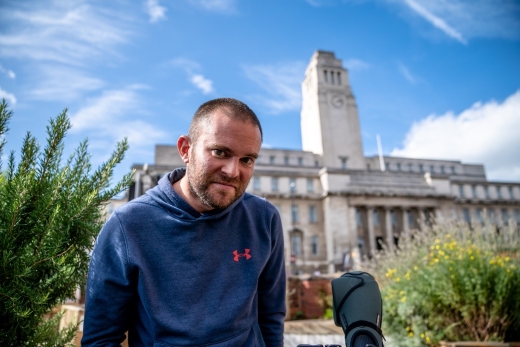 Paul, on rescuing the female: "It was a weird 48 hours…a bit surreal."

All three chicks (two males and one female) eventually fledged successfully, and have been doing well ever since. By now the adults will have taught the fledglings how to hunt, and they should be fending for themselves. They will have to hone their hunting skills fast if they are to survive the coming winter. This year has given us reason to be optimistic for the future of peregrines in Leeds –hopefully they will be around for many years to come.

RT @LULGalleries: Due to essential maintenance work, The Stanley & Audrey Burton Gallery remains closed this morning. We are sorry for any…