On the 20th September the annual Institute of Science and Technology (IST) one-day Technical Conference was held at the Crowne Plaza Hotel, Newcastle.

The event was sponsored by CERN and Veolia and started with the IST CEO Terry Croft giving an update on the IST. The first keynote speaker, Dr Kianoush Nazarpour a Reader in Biomedical Engineering at Newcastle University gave an excellent talk on Star Wars, Terminator, Bionic Hands – Science Fiction or Reality? This talk reviewed the history of bionic hands starting from the first known prosthetic hand built in 1504 to the recent exciting developments in prosthetic hand control design. Remarkable developments have been achieved in the last 500 years. However it was unfortunate to hear that whilst artificial legs and arms are available on the NHS, artificial hands aren’t due to the cost. 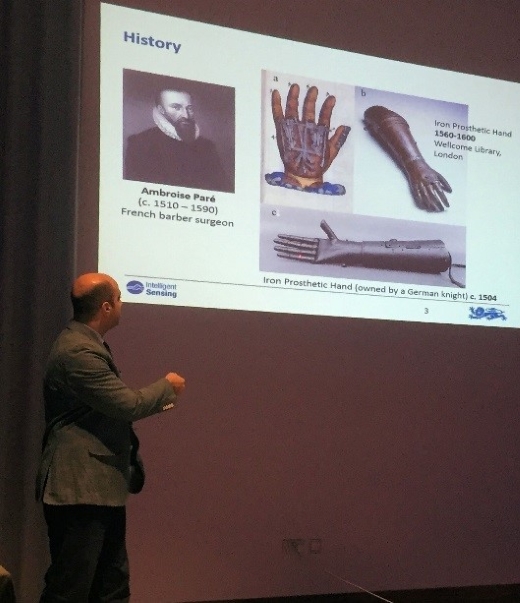 There was a wide variety of workshops/talks to attend throughout the day, the first one I attended was A Technician's Eye View of the History of Science by Andy Connelly from the University of Leeds. Technician’s involvement in the making and recording of scientific knowledge has long been disregarded as the focus was on the scientists who made the discoveries. This talk looked at the lives of some interesting technicians from pre-history up to modern day, which was very interesting though it was frankly alarming to hear how poorly female technicians were treated and thought of. Technicians as a whole have sadly long been the invisible members of the scientific and artistic workforce but at least initiatives such as the Technician Commitment and #TechniciansMakeitHappen are changing that for us and making us more visible. 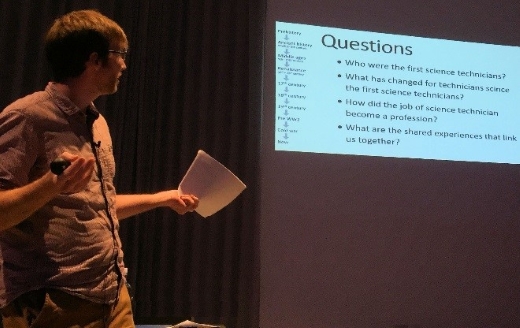 Andy Connelly giving his talk on the history of Technicians

The second workshop was by Raymond Veness from the European Organization for Nuclear Research (CERN) called CERN – Working on the Edge of Technology. This was a mix of history, its construction and current use. It also gave an outlook of on the technologies that are being developed for the Large Hadron Collider and other particle accelerators. The talk also illustrated how the technicians and engineers who make up two thirds of CERN’s staff are a vital component in research, including recent discoveries such as the Higgs Boson.

After a break for lunch, networking and a good look at the suppliers stalls it was time for the second keynote talk given by Professor Sir Doug Turnbull, Professor of Neurology at Newcastle University, about Diseases Affecting The Small Circle Of Life. He spoke about his research investigating techniques for improving the lives of patients with mitochondrial disease, which proved to be oddly fascinating. During his career he created an IVF technique which prevented disabling genetic disorders from being passed on to future generations (also known as “3 person babies”), this was passed into law in 2015. It was for this ground-breaking research that he received a knighthood.

In the afternoon I attend a third and final workshop which was on CPD: A practical toolkit for building your portfolio by Jemma Walker from the Birmingham Women’s Hospital. This was aimed at Science Council registrants, like myself, who are required to do Continuing Professional Development (CPD). I was struggling in the reflective practise area which means that whilst I was doing good and useful CPD, I wasn’t very good at recording exactly how it helped me and how I applied it to my job. As reflective practise is a requirement by the Science Council to keep my professional registration I needed help with this. Learning about the Gibbs Cycle and De Bono’s Hats technique, which were two ways of tackling this, was very helpful. The workshop also showed me a different way to record my CPD which was more centred on reflective practise.

At the end of the day Roger Dainty Poster Award was presented by Helen Sharman, president of the IST. The first prize went to David Race and colleagues. There were also 5 extra commendation prizes awarded this year as the judges found it difficult to decide a winner as the quality of the various entries were so very good. The next IST one-day Technical Conference will take place on 18th September 2019 in Birmingham. All in all I had a great & worthwhile day and I hope to attend next year’s conference.