Many people buy a home; in 1994, Professor Duncan McCargo bought a story. 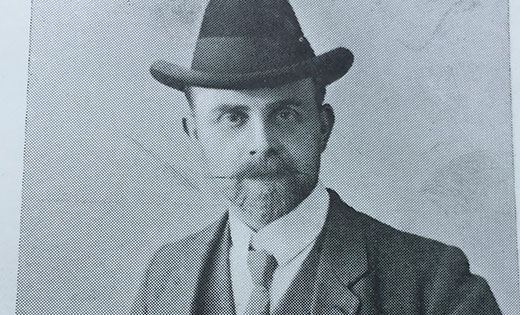 There were no old boxes in the attic of the Victorian house when Professor of Political Science Duncan McCargo moved in 25 years ago. Instead, it contained elements of Charles Barker Howdill’s darkroom.

Howdill (1863–1941) was an architect, photographer and prodigious traveller, who gave hundreds of glass slide lectures all over Britain at the beginning of the 20th century. A Yorkshireman of wide-ranging talents and great energies, Howdill straddled the Victorian, Edwardian and Georgian eras through which he lived. From 1907 to 1993 his family lived in Hanover Square, close to the University campus. His house, where Professor McCargo now resides, bears a blue plaque installed by Leeds Civic Trust.

Professor McCargo, who helped unveil the plaque last month, said: “Howdill was a thoroughly engaging figure, a man of incredible drive who never stopped re-inventing himself, a non-conformist in every sense. His photographs deserve a wider audience: they combine intimacy and distance, evoking long-lost moments with a striking immediacy.”

Howdill’s daughter, Madge, had been promised a small exhibition about her father, but it has taken a quarter-of-a-century to come to fruition. This year, Professor McCargo is helping make the exhibition a reality after receiving a small grant from the Cross Disciplinary Innovation Fund. Jointly financed by the University’s Cultural Institute and Leeds Museums and Galleries, the fund aims to support academics from any subject to work with museum collections in new ways.

Working in collaboration with local historian, Janet Douglas, Professor McCargo has created a slide show of Howdill’s best photographs, which can be displayed on any video or computer screen. The slide show is accompanied by two pop-up banners, and the resulting exhibition has already been shown in the Social Science Building. It will be hosted on the University campus on several more occasions during the upcoming months.