Famous alumnus, Johnny Mowlem, has been inducted into the University’s Sporting Hall of Fame. 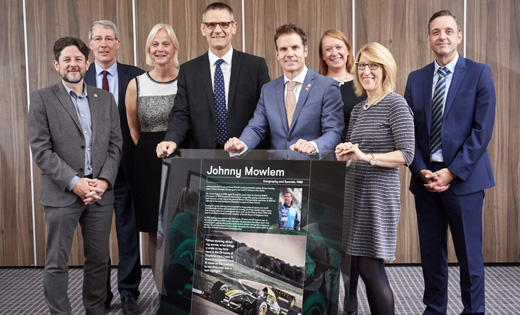 Johnny, who graduated from Geography and Spanish in 1988, is one of Great Britain’s most successful racing drivers, having been ranked amongst the top sports car and GT drivers in the world.

His career began in 1989, and he was crowned British Champion a mere six years later.

During his career, Johnny has competed in every class of sports car world championship racing, with victories and podiums at virtually all of the major endurance events, including the 24 Hours of Daytona and the world famous Le Mans 24 Hours.

Johnny was inducted into the Hall of Fame at the University’s sports scholarship awards evening – an event celebrating successful students awarded a scholarship for the year ahead.

Prior to the presentations, Johnny spent time with the sports scholars talking about his career and success, inspiring our students at the beginning of their own sporting careers.

And Johnny will continue to inspire our students in the future by supporting the sports scholarship programme, helping students gain sporting success whilst still studying for a world class degree.

You can take a look at the full Sporting Hall of Fame by visiting The Edge. It’s located alongside the sport scholarship board, where you can read more about Johnny and all our other Hall of Fame recipients, including:

RT @UoLDisability: Do you have a burning question about disability you've been too afraid to ask? Join us online tomorrow for a special #UK…