A dramatic, sculptural artwork has been approved for the University’s flagship building for engineering and physical sciences.

The three-dimensional aspect of the artwork will add an impressive focal point to the Sir William Henry Bragg Building, as seen from Woodhouse Lane 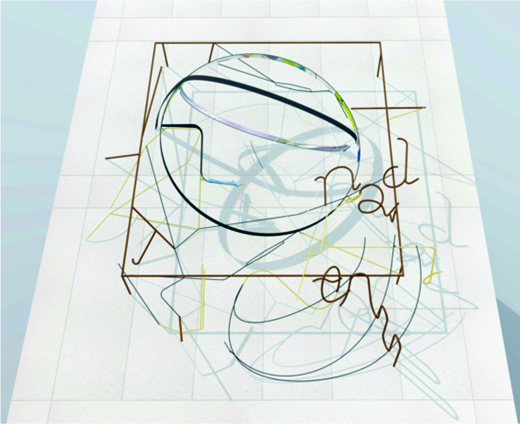 An ambitious sculpture honouring revolutionary science will be in a prominent position on the side of the new building development on campus. The two-storey artwork by Sara Barker has been given the green light by Leeds City Council planning department this week.

The design will feature on the outside of the Sir William Henry Bragg Building, which is under construction in Woodhouse Lane and honours Sir William’s pioneering research in developing X-ray crystallography at the University in the early 20th century. Bragg and his son were awarded the 1915 Nobel Prize in Physics for their work.

Within the sculpture lies symbolism that alludes to the Bragg equation, which explains the relationship between X-rays directed onto a crystal and their diffraction, allowing the atomic structure of materials to be investigated. Parts of the sculpture will be finished with iridescent paint, which refracts light rather than creating colour by pigment, so it changes colour as viewed from different angles. This type of paint was developed by Professor Helen Gleeson, the current Cavendish Professor of Physics at Leeds, the same position held by Bragg in his day.

The new building is scheduled to open in late summer 2020, and the dramatic sculpture reflects the University’s ambition to deliver a step change in the research activity in engineering and physical sciences, to enhance a culture of multi-disciplinary working and support significant advances in our understanding of the physical world.

The artwork physically refuses to be pinned down by mediums, sitting between the qualities of drawing, collage, textile, painting and sculpture. It draws our eye to shapes and symbols suspended in a delicately woven metal tableau.

Sara said: “I want the sculptural language to shout out to the powerful advances happening in the physical sciences at Leeds, and also to the rich history of the University in its broadest sense, for the sculpture to reveal itself over time and become part of the fabric of the building.

“I hope the forms found in the sculpture provoke questions, as people discover the scientific lettering of Bragg's famous equation, and also a more patterned and playful narrative of molecular and textile and crystallographic structure.

“But, frankly, this is an artwork and it has to be captivating on a level we can't articulate and, as an artist, the moment of truth is in seeing ideas thought through by hand in the studio, tactile and intimate, forcibly evolve into the monumental and concrete.”

Dr Jim Young, Programme Director for the building, said: “We are extremely pleased with the news that this beautiful artwork has received planning permission from the council. It is a unique and intelligent piece of art and I look forward to seeing it in all its glory.”

Sara Barker was born in Manchester in 1980. She was educated at the Glasgow School of Art and University of Glasgow.

She will also be working with Leeds Art Gallery (2020) to coincide with the new commission at the University.