A major fundraising campaign – Music Works – has been launched by Opera North to enable a significant capital redevelopment project during 2019-2020. 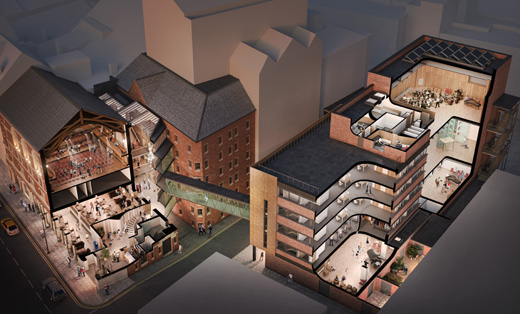 The company’s transformed buildings will be a home for everyone; developing talent, supporting world-class artists and inspiring audiences, and will cement Opera North as a modern business and a creative powerhouse in the heart of Leeds.

Music Works will create a place for artists to make thrilling music, where people of all ages can learn and participate, and where audiences are welcome to connect with each other and Opera North.

Situated in the heart of Leeds in New Briggate, a major thoroughfare to the north of the city, the redeveloped buildings will comprise:

The target for the Music Works fundraising campaign is £18 million. This will deliver the project, which represents a cost of £15 million, and will also create a new fund to enable Opera North to deliver more music and education activity in the future.

Opera North has raised £12.7 million to date, achieving 70% of the overall target, including a significant philanthropic gift of £11.25 million from Dr Keith Howard OBE, President of Opera North and founder of Emerald Publishing. A long-standing supporter of the company, Dr Howard has previously supported the first transformation of the Howard Assembly Room, wider improvements to the Leeds Grand Theatre and the creation of the Emerald Grand Hall, in a renovation project which took place between 2005 and 2008. He was founding chairman of the Opera North Future Fund and supports numerous other charities, organisations and causes. Dr Howard, who holds both bachelor's and master's degrees from Leeds, was presented with an honorary degree by the University in 2011.

Dr Howard’s generosity and passionate belief in the importance of opera and music has been central in allowing the company to deliver this transformational project. 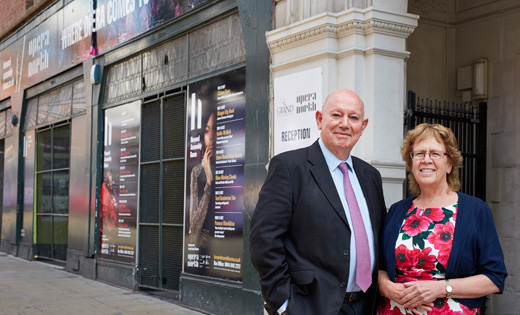 Leeds City Council has contributed £750,000, together with the lease of the vacant shops in New Briggate, and the balance of the funds raised to date has come from a number of private donors.

There remains a funding gap of £5.3 million to close, and the company is now looking to national trusts and foundations, the business community and major donors to secure their support, before rolling out opportunities for audiences and individuals to play their part in the success of the redevelopment at many different levels.

“Music Works is about creating a building to make and experience music, but it’s also about creating thrilling, powerful performances and the opportunities for participation that will bring the new spaces to life for many years to come. The project will deliver a building – together with an associated programme of performance and educational activity – of significant value to our city and region.

“We are extraordinarily grateful for the generosity and commitment of everyone who has supported Music Works to date, and in particular to the long-standing support of Dr Keith Howard OBE, whose transformative gift has enabled this project to come so far, bringing these ambitious plans within touching distance. We believe this represents one of the single largest philanthropic gifts ever made by one individual to an arts organisation in the UK and certainly outside of London, and we are indebted to Dr Howard for this extraordinary vote of confidence in the future growth of the company.

“We still have a significant target of £5.3 million to raise, but we are confident we can be successful with the backing of our many supporters and stakeholders, ensuring we turn this plan into reality and make music work for everyone in Leeds.”

Dr Keith Howard OBE said: “My long-held passion for music has been nurtured by Opera North over many years and it is my belief that this project will enable the company to pursue its ambition to bring music to everyone.

“These new world-class facilities will create the perfect environment for artists, participants and audiences to come together and experience the joy that music and music-making can bring.

“I sincerely hope that others will join me in supporting Music Works, which will create a place benefitting the people of Leeds and beyond well into the future.”