Suffering the emotional scars of three miscarriages in the space of just two years left Vicky Treherne struggling to cope with the symptoms of Post-Traumatic Stress Disorder (PTSD).

Pictured at the official #StrutYourSongs 2018 Launch Party in Leeds are (from left) Nashville star Charles Esten, Vicky Treherne, Matthew Treherne and Ruth Bender-Atik, National Director of the Miscarriage Association, flanked by family and friends, including many University colleagues 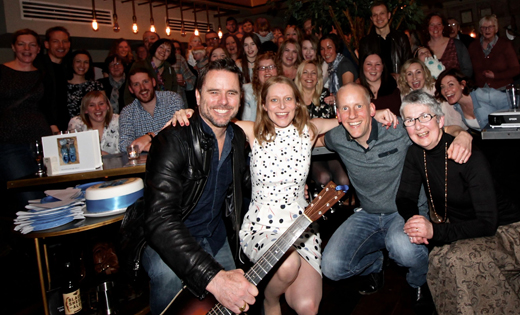 But from the midst of a very low ebb, the Senior Development Manager (Legacies) in the Alumni and Development Team found solace in the unlikeliest of places… the music of a popular TV show.

“Reeling and shocked, and finding it very difficult to express the grief and pain we were feeling, me and my husband, Matthew, looked for some easy ways to distract ourselves,” explained Vicky. “That’s when we discovered the TV series Nashville.

“But Nashville is more than just a TV show. If you know it, you’ll understand it’s the music that makes it special – music often takes the place of dialogue between characters. I suppose for me, especially, that music became a way for me to have a dialogue with my own pain.

“Through Nashville, I discovered a whole new genre of music and a whole new group of performers and songwriters. I discovered that the man behind my favourite character – Deacon Claybourne, aka Charles (Chip) Esten – was releasing a new song every single Friday.

“While I grappled with symptoms of PTSD and the aftermath of our three miscarriages, those records helped carry me through and became my lifeline. I was struggling to look forwards to our future, but I could at least look forward to Friday and a new Chip Esten Song.

“I began to understand just how much we had been damaged by our experience, and I realised at the same time that I wanted to speak out about what had happened to us, and to do something to raise awareness of miscarriage and the pain and devastation it wreaks.”

And that's how #StrutYourSongs was born.

“Together we raised awareness of miscarriage, we celebrated the healing power of music, said thanks to Charles Esten and raised £4,500 for the Miscarriage Association.”

But the campaign didn’t stop there.

Buoyed by her success, Vicky decided to organise #StrutYourSongs again this year. On June 9, 174 people in ten countries gathered with the target of raising £7,767 – the cost of running the Miscarriage Association’s helpline for a month. The helpline is at the heart of all the charity does and brings much-needed advice and comfort to those grappling with the trauma of pregnancy loss.

And both campaigns have received support from a very special source.

Vicky said: “The cast of Nashville was performing in the UK at the time of our first campaign, and we went to see them a few times. I met Chip Esten and told him my story and how his music had helped me – he seemed genuinely interested.”

Not only that, but Esten took time out when he played Leeds Arena to perform at Vicky’s 2018 #StrutYourSongs campaign launch event.

Chip said: “I saw the work you were doing last year and I thought it was a fantastic idea.

“I don’t believe any of us will know what you’ve been through, but I do know you’ve done what the only answer to pain is, and to grief and darkness, which is you take your time and just let yourself hurt and you let yourself bleed emotionally until you get your bearings and you stand up and do something on behalf of someone else, and you try and take away someone else’s pain a little bit.”

Many members of University staff have also got involved in the campaign. To acknowledge this support, and to mark national Babyloss Awareness Week (9-15 October), the University’s Parkinson Building will be bathed in pink and blue lights for the duration of the event.

Vicky said: “Miscarriage affects one in four pregnancies and is undoubtedly something that affects many of the staff on campus. Lighting the Parkinson Building for Babyloss Awareness Week therefore seems entirely fitting.”

Initiated by a group of bereaved parents 16 years ago, Babyloss Awareness Week has grown and is now supported by more than 60 charities and groups across the UK. The week ends on Monday 15 October, which is internationally recognised as Pregnancy and Infant Loss Remembrance Day, when thousands of families across the world join together lighting candles at 7pm (local time) to remember their babies by forming a global ‘wave of light’.

Vicky added: “The cause is a very personal one for me. I have devoted a lot of my spare time in the past two years to developing our #StrutYourSongs campaign in support of the Miscarriage Association, and to encourage people to speak more openly about pregnancy loss.”

Further information on the work of the Miscarriage Association can be found by visiting its website.

NB: Please note this campaign has been run again in 2019, raising nearly £6,000 to date. You can still donate via Vicky's Virgin Money Giving page.

RT @UniLeedsODPL: There's still time to sign up to our leadership development programmes in August/Winter: 🔹 Discovering your Leadership 🔹…