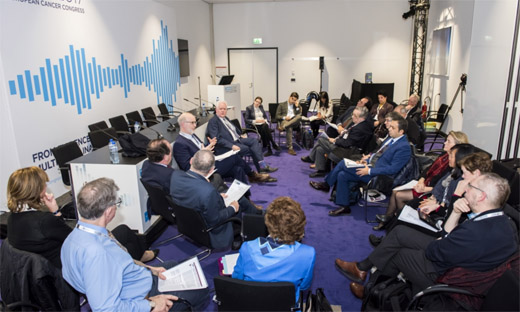 This coveted accolade honours initiatives that help tackle some of Europe’s most pressing health challenges.

One of the key outputs from the research has been the development of a 70:35 Vision – 70 per cent long-term survival for all cancer patients across Europe by 2035.

Peter Selby is Professor of Cancer Medicine at Leeds and President of the ECC. He said: “Our 70:35 Vision is built upon the pillars of cross-border and interdisciplinary cooperation, sharing best practice and ensuring research and innovation gets translated for the benefit of patients.

“This is a superb example of how cooperative European activities that involve sharing best practice between countries can result in top class prize-winning initiatives.”

Professor Mark Lawler, Chair in Translational Cancer Research at Queen’s University Belfast and Vice-President of ECC, received the award today (Wednesday 3 October) on behalf of the partnership during the opening ceremony of the European Health Forum Gastein – the premier European health policy conference and an official event of the Austrian European Council Presidency.

In a joint statement, Professor Ian Greer, President and Vice-Chancellor of Queen’s University Belfast, and Sir Alan Langlands, Vice-Chancellor of the University of Leeds, welcomed the announcement: “The European Health Award is a prestigious award that recognises the very best of the European collaborative approach, involving more than 60 stakeholders from 25 European countries, working together for the benefit of patients.

“We are immensely proud that an initiative, which was developed and conducted by Queen’s University and the University of Leeds, has been recognised across Europe as a quality exemplar of best practice."

Professor Lawler added: “Cancer knows no borders, so it’s important we work together to develop solutions that address cancer inequalities in all parts of Europe. I am immensely proud to be accepting this award, not only on behalf of our team, which has worked together during the past five years on this initiative, but also on behalf of the millions of European citizens who are living with and beyond cancer, and experiencing cancer inequalities every single day of their lives.”

Working in close partnership with European patient organisations and professional societies has been a key part of the initiative.

Speaking at the award ceremony, Professor Lawler said: “Cooperation is the key to this initiative. We need to compete, not against each other, but against our common enemy – cancer.”