Recognising Excellence: Our Women of Achievement 2018

The winners of the Women of Achievement Awards 2018 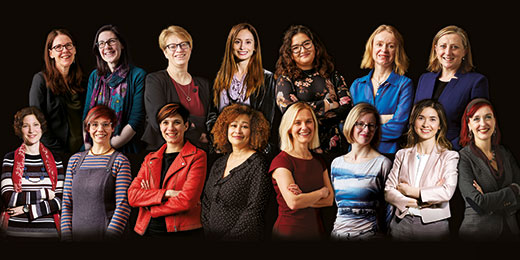 Held in the Clothworkers Centenary Concert Hall, the Awards were hosted by Professor Lisa Roberts, Deputy Vice-Chancellor: Research and Innovation. Alumna and Chief Executive of the Southbank Centre, Elaine Bedell, gave a keynote speech and presented the winners with their award certificates.

Held for the fifth time, the Awards are a key part of the University’s Leeds Gender Framework. They celebrate the significant contributions and impact that the winners have made across the University and beyond. The women receiving awards were all nominated by their peers, and represent academic and professional staff, as well as students, and are drawn from across the University. They all share a common commitment to excellence and have performed outstandingly in their fields, whether this be in research, student education or student experience, scholarship, leadership of key University initiatives, or supporting administrative and technical activities.

The year’s Women of Achievement are:

Elizabeth Kapasa, School of Mechanical Engineering
Won the national Institute of Physics and Engineering in Medicine’s Spier’s Prize for Outreach 2017 for her contribution to promoting bioengineering.

Professor Fiona Meldrum, School of Chemistry
Awarded the 2017 Interdisciplinary Prize of the Royal Society of Chemistry

Professor Jane Nixon, Leeds Institute of Clinical Trials Research, Faculty of Medicine and Health
Made a Member of the Order of the British Empire (MBE) for services to health research (2017)

Lenka Vráblíková, School of Fine Art, History of Art and Cultural Studies
After her leading role in organising the international ‘Feminist Readings’ conference at the University in 2016, Lenka helped to secure funding for the ‘Feminist Readings Network’ from the Gender and Education Association.

Louise Banahene, Head of Educational Engagement
Awarded an MBE in the New Year's Honours (2018) list for her services to Higher Education

All eight of the University’s faculties were represented in the Awards, as was the Leeds Doctoral College and professional services such as Educational Engagement, Sustainability Services, and Strategy and Planning, showing how excellence is being achieved throughout the institution.

Portrait photographs of the award winners will shortly be installed as part of a permanent exhibition in Parkinson Court. The images of this year’s winners will join those of the 50 women recognised in previous Women of Achievement Awards, helping to create an enduring showcase celebrating the University’s talented and remarkable women, and providing exemplary female role models to inspire other staff and students in their career development.

The judging panel also selected five further female colleagues to appear on the Women of Achievement Roll of Honour:

Professor Andrea Nelson, Dame Kathleen Raven Professor in Clinical Nursing Research, Head of the School of Healthcare, Deputy Dean for the Faculty of Medicine and Health
An exceptional clinical researcher who is widely recognised for her contributions to the field of nursing management of chronic wounds.

Professor Julia Barrow, Professor of Medieval Studies, School of History
Elected a Fellow of the British Academy for her outstanding contribution to research and distinction in the humanities and social sciences.

Dr Anwesha Sarkar, Associate Professor of Food Colloids, School of Food Science and Nutrition
Recognised for her contributions to the field of oral processing. In 2017 she was awarded €1.3m by the European Research Council.