Leeds prides itself on being an international university. 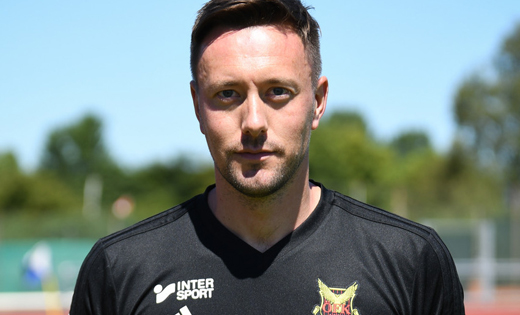 And its standing on the global stage continues to rise.

For this reason, it’s not surprising to find staff and students – past and present – scattered across the planet.

But sat in the dugout at the stadium of a little-known Swedish football club, barely 200 miles from the Arctic Circle, might be one of the more unlikely locations!

However, that’s where you’ll find one former staff member as he attempts to carve out a name for himself in the professional game.

Football fans could be excused for never having heard the name Ian Burchnall before. But that might all be about to change.

When Graham Potter departed Östersunds, lured by the opportunity to try and lead Swansea City back into the English Premier League, it was another Brit who was invited to take over the helm at the Jämtkraft Arena.

And Ian has some big boots to fill.

In six years at the club, Graham Potter guided them from the regional tiers to the top-flight Allsvenskan with three promotions, winning the Swedish Cup in the process and humbling Arsenal 2-1 on their own turf during a Europa League tie last season. No mean feat for a team representing a town of just 43,000 people.

But, while Potter had a 13-year career as a professional footballer, Burchnall's playing days were limited to Leeds Metropolitan University (now Leeds Beckett).

But that hasn’t deterred the former Leeds United and Bradford City academy coach, who spent seven years at the University of Leeds as Head Performance Coach, overseeing all football activity on campus when aged just 22.

In fact, he is using many of the lessons he learned during his time here to help shape his management skills.

Ian said: “I absolutely loved the job and have some brilliant memories – it’s a fantastic place.

“I was the coach when we won the British University & Colleges Sport (BUCS) Premier League for the first time in the University’s history.

“I learned and developed a lot with regards to tactics and coaching sessions, but the biggest thing for me is communication and working with a wide variety of people from varying backgrounds to create a team environment that people want to be a part of. I learned how to lead people and work with them to achieve a goal. These lessons and skills were very important for me to learn going into the professional game.”

Ian also got a lot of support from his University colleagues.

He added: “Most of the guys that helped me when I first came over have left, but Stewart Ross, Rob Wadsworth, Paddy Craig, Matt Davison, Paul Tilley and Gareth Weaver-Tyler, to name a few, along with Phil Riley who coached together with me, were all very supportive and helped a lot during my progress as a coach at the University.”

Another helping hand came in the 6ft 3in form of ex Sheffield United, Leeds United and Benfica striker, Brian Deane.

Ian added: “Brian was doing his coaching badges and needed the hours to log so he could pass his qualification. He enjoyed the environment, and after passing his badges, stayed with us and helped for a couple of years.”

It was this friendship that eventually lured Ian away from the University in 2012 to take up the post of Deane’s assistant at Norwegian side Sarpsborg 08. It was during this time Ian completed his UEFA Pro Licence.

Having been told – while working at Bradford City’s academy – he would struggle to make it in management, he proved his doubters wrong within three years.

Although the Norwegian adventure came to an end after Deane was sacked, Ian was head-hunted by Viking – one of the top clubs in the country.

He lost his job after a year in charge, to protests from fans. But his reputation as a top coach was growing.

Ian originally took temporary charge of the team in June, but was given the job on a permanent basis after just one game.

The club currently lie fifth in the league with 10 games to play, as the Swedish season finishes in mid-November. Undaunted by the prospect of a crucial fixture looming against the mighty Malmö, Ian is aiming for the top.

He said: “It would be great to challenge the top three and reach the Europa League again.”

Ian Burchnall with one of his young stars. Picture courtesy of Östersunds FK

But why is it so many young English managers, like Ian, are having to move abroad to ply their trade?

He said: “I think everybody has their own reasons – mine was mainly due to the fact I felt as a non ex professional player working my way up in the English system, it was very difficult to break through and opportunities were rare.

“I saw the opportunity to move to a higher level abroad, so took it. The ‘hire and fire’ culture in the English game means coaches don’t get much time to develop into a role, and clubs are less inclined to take perceived risks on coaches that are less known in the game, whereas the culture is different in some countries abroad.

“My advice [to others in a similar situation] would be to be patient; take your time and find out as much about yourself and how you want to work, what your values are and how you want to play football. That’s the foundation for every good coach, I think, and then work hard – go out and watch top coaches work and have an open mind for learning.”

Paddy Craig is Assistant Head of Sport (Development), Sport and Physical Activity, at the University. He said: “It comes as no surprise that Ian has ended up coaching in professional football.

“His approach during his time with us as our Head Coach was to apply the standards and culture of a professional programme to university sport. During his time at Leeds, football had its most successful years, being crowned BUCS Premier League champions for the only time in our history.

“He also nurtured a number of talented players and guided them into professional contracts post-graduation. Ian was a top bloke, well-liked by his players and colleagues and we wish him all the very best with his new adventure in Sweden.”

So, what are the chances of seeing Ian in the Elland Road dugout any time soon?

“Ha! I would love to be in the dugout in Elland Road, and maybe one day it’s possible, but for now I am enjoying life abroad, learning a lot. Maybe in the future, when I’m ready, I will come back.

“The hardest thing is probably being away from family and friends a lot. I miss things you become accustomed to – foods, the local pub etc. Generally, the Scandinavian way of life is good for me and the family, so we enjoy it, but the occasional bag of fish and chips wouldn’t go amiss!”

And what advice does he have for the current crop of aspiring students as they embark on University life?

Ian said: “Enjoy it. It’s a really amazing time of your life and I would love to do it all again.

“I am envious when I see students beginning on their journey, as there is so much adventure, enjoyment and knowledge to learn and develop. I still keep in touch with many of the players I worked with over the years and it’s great to see what they’ve been able to go on and achieve.

“Experience as many different things as you can and get involved with as much as you can, as you will never get the time back and the memories you create will last forever – so make the most of it.”