Two Leeds researchers – whose work ranges from exploring how people with hearing problems enjoy music to the history of anti-ageing – have been shortlisted for a prestigious national award. 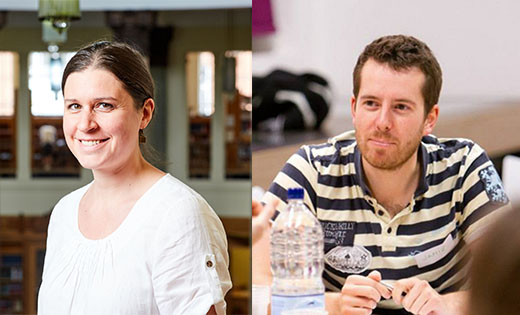 The inaugural award has been organised by the Arts & Humanities Research Council (AHRC), in association with the Wellcome Trust.

Five categories are designed to celebrate the achievements of those who have helped to inform and transform the health and wellbeing of the nation through the use of arts and humanities research. An overall winner will be selected from these categories to receive the Health Humanities Medal for 2018.

Dr Greasley, together with Dr Harriet Crook from Sheffield Teaching Hospitals NHS Trust, has been nominated for the Inspiration Award for their project Hearing Aids for Music, which explores the music listening behaviour of people with hearing impairments.

The three-year interdisciplinary project – which brings together researchers in the fields of music psychology and clinical audiology – represents the first large-scale systematic investigation of how music listening experiences are affected by deafness and the use of hearing aids.

Dr Greasley said: “Musical activities play a key role in people’s health and wellbeing. With the support of the AHRC, we have carried out important new research into how music listening and performance are affected by differing levels of hearing loss, and developed advice for hearing aid users and audiologists to help improve access to music.

“We are very pleased the project has been recognised in this way and want to thank all the hearing aid users in the UK, and internationally, who have taken time to share their experiences during the past three years.”

Dr Stark has been nominated for the Best Doctoral or Early Career Research Award. His research focuses on the history of rejuvenation and anti-ageing in the 20th century, exploring in particular the links between biomedical and socio-cultural approaches to ageing, vitality and beauty.

He said: “I am really pleased to be shortlisted for the inaugural Health Humanities Medal. As an historian exploring infection, public health and ageing, I have been lucky enough to collaborate with some fantastic colleagues.

“These partnerships mean that my work speaks to major current challenges, such as ageing populations and anti-microbial resistance.”

Professor Edward Harcourt, Director of Research, Strategy and Innovation at the AHRC, said: “We are delighted to be supporting these new awards. The AHRC has always seen the importance of backing the health humanities. We were struck by the exceptional quality of the applications, which express a more inclusive vision of health and wellbeing and how to achieve it in ways that are not driven by medical science alone.”

The winner will be announced on Tuesday 11 September 2018 during an awards ceremony at the House of Commons.

Visit the AHRC webpage for further information about the awards.