The Great Exhibition of the North

Leeds researchers successfully showcased their work at the summer-long celebration of art, science and culture in the north of England.

A Geodesic dome, made out of Yorkshire Spun wool, created by Dr Jane Scott for the Great Exhibition of the North 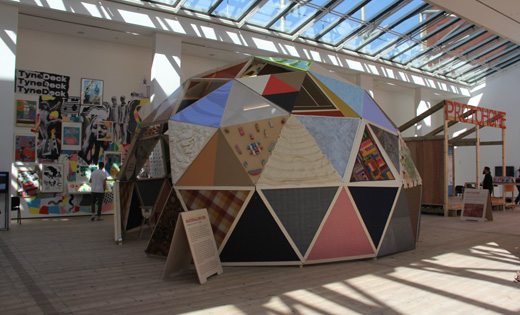 Two teams from the University, participating at the Great Exhibition of the North in Gateshead and Newcastle, staged various activities and discussions on Saturday 28 and Sunday 29 July.

Paul Affleck, CORECT-R Programme Manager at Leeds, led a team from the Institute for Data Analytics in the School of Medicine to present an event entitled Your Healthcare Data, Your Control.

The team, comprising of Chris Carrigan (Rutherford Fellow and advisor to use MY data), Emily Boldison (Engagement Facilitator for Bowel Cancer Intelligence UK) and Dr Beth Levick-Shortall (Research Fellow), among others, informed the public of what routine healthcare data exists, how it is used and what control they have over their own information.

They also explained how BCI UK, a research collaboration hosted by the University, and funded by Cancer Research UK, uses such data for the current bowel cancer research taking place.

Paul says: “We used colouring sheets to describe basic bowel anatomy. The sheets then formed an impromptu art gallery on a nearby wall. It would have been considerably larger, but many of the attendees wanted to take their art work home with them!”

A popular activity among visitors was the ‘pop (short for population) box’. This is a large container of pink and white ping pong balls. Attendees guessed how many white balls there were for every pink ball. They then used scoops to simulate population sampling.

They were also joined by representatives of use MY data, a movement of patients, relatives and carers that harnesses the patient voice to build confidence in the use of data for research and analysis. They explained their advocacy of health data research that fully involves patients and the public.

Paul added: “We estimate more than 200 people attended during the two days, and some families stayed for more than an hour. It was a gratifyingly busy weekend!”

On the same weekend, Dr Ciarán McInerney, Research Assistant in Biostatistics at the Leeds Institute of Cardiovascular and Metabolic Medicine (LICAMM), presented a display entitled Dr Digital, based on a project funded by Macmillan Cancer Support.

In a special collaboration with Maxx Holmes, a PhD Researcher in Biophysics, they staged a display where people could design an algorithm – a series of steps used to solve a problem – for healthy eating and practice their surgeon skills with a stitching algorithm to be the next ‘Dr Digital’.

Dr McInerney says: “We engaged visitors in activities and discussions about using algorithms and data for improving medical care, and developing models of human hearts.”

Still available to see is an installation by Dr Jane Scott, a Senior Teaching Fellow at the School of Design, called Growing Medium. It is within the Materials That Shape The North group exhibition for Idea Of The North at The Baltic Centre for Contemporary Art in Gateshead, which runs until Sunday 30 September.

The work, composed of 100 per cent Yorkshire Spun wool and assembled with laser-cut veneer, has been produced using the latest computerised knit technologies at the University. It will physically change in shape during the course of the summer in response to environmental conditions within the gallery space.

Dr Scott was invited to participate in a panel discussion held within the MaterialDriven Dome at The Baltic on 12 July. The event was a success, with representations from industry, academia and independent designers, as well as a public audience, all seated within the dome structure. There was a lively discussion following individual presentations and particular interest in the programmable aspects of Jane's environmentally-responsive knit installation.

Visit the Great Exhibition of the North website for further information.

And email the Public Engagement team at the University if you would like to explore the idea of exhibiting your research at such events.