Gareth is a sculpture technician at the University of Leeds in the School of Design. He helps students bring three-dimensional fruition to their treasured ideas.

Ideas that until then have only ever existed in their heads.

I always wanted to do stuff with my hands, always been interested in architecture, in fashion, any 3D forms rather than sitting on a stool, painting on a canvas. It is more exciting getting my hands dirty in that way. After doing a foundation year at college, I did a BA which was focused on sculpture at Bretton Hall. It was three years spent purely on sculpture - loved it. Sculpture opens-up so many materials. That is also the great thing about my current role at the University; every student who comes to the workshop has a different idea and a different material they want to use.

I have been a technician at the University for fourteen years now. Before that, I was assisting a sculptor called Michael Johnson in Doncaster. I got the job in 2002 after doing a Masters. I had been working in the Henry Moore Institute in Leeds as an invigilator and helping hang and install works of art. From there I saw a job advertised as a technician working for Michael. He taught me an awful lot about working with steel. He would do the designs, get the steel laser cut out, and I would weld it all together. He would either accept or reject what I had done and then send it out to galleries. He’d get to go to the opening ceremony while I was stuck in the workshop in the dirt. Working at the university, I still don’t get my name on the exhibitions, but I do get a lot of appreciation from the students.

Working with Michael was good for a year, but it was taking away from my own art practice. The last thing I wanted to do was work 9-5 on his work then go back into the studio and do my own work. I’d started working as a tutor at Park Lane College (now Leeds College) teaching sculpture when I got a phone call from one of my old tutors from Bretton Hall. He was head of the university’s sculpture course and said their technician had left - would I fancy a job? That was 2004 and I’m still here.

I am now a technician for the School of Design. Any students, BA, MA, or PhD - in fact anyone who wants any workshop assistance - comes to me and I help them turn any ideas they have into reality. They can cast in plaster, fibre glass, resins, or concrete. They can use woodworking, welding. They can even use 3D-printers, either for manufacturing or prototyping. I love working with the students. I love that each student comes with a completely different project. You are constantly dealing with different ideas - it is not the same process every single day.

Most of the time the student just gives me an idea on a piece of paper. Sometimes you get a good drawing, sometimes it is just a squiggle. The hardest thing is trying to picture what is in their head and understand what they are trying to achieve and so what they need help with. As much as I can, I try to pass skills onto the students. I want the students to do as much as they can themselves without me doing the work for them. That is how I was taught and I think it is the best way. I don’t want those skills of making lost. I have been criticised for this and told that I am a technician not a tutor. However - define teaching! Am I teaching someone to weld or showing them? I don’t tell the students what to research, but I can’t just sit there and let them make mistakes, burn the place down, or have injuries. When a student comes to me and says they want to build something, the academics don’t always know how to do it because they are more research-based and sometimes haven’t been in a workshop for years. Teaching them how to do it rather than telling them what to do – that is our job.

Since Bretton College my own art work had focused on concrete casting. However, it got a bit stale and I reached a point where I didn’t know what I wanted to do. I didn’t just want to knock stuff out for the sake of it and galleries wouldn’t like that. So, when I got the job at the University it gave me the opportunity to spend a bit of time thinking about where I wanted to go with my art work and I spent two years not making anything - it was exciting. I spent time just thinking about what I was interested in; looking at travel photos, what I was taking photos of, what was interesting me. My family is from Porthmadog and I have surfed since I was a kid so I had a lot of images of sunsets, nature, and waves. I realised that I also had a lot of images of a style of architecture known as Googie. 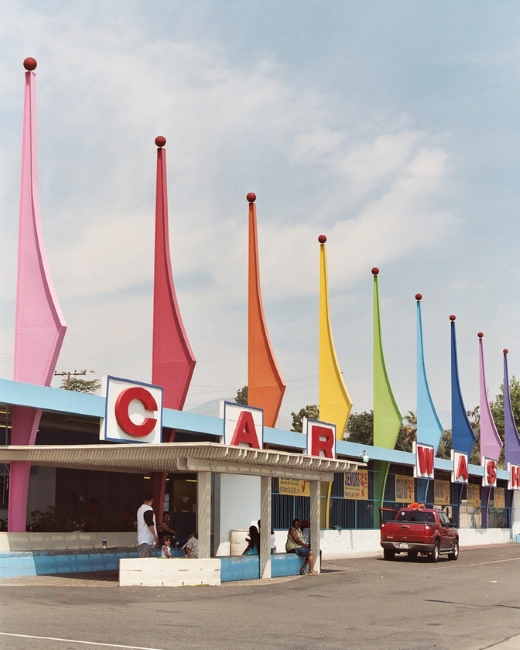 Googie is a style of architecture from Los Angeles. Imagine buildings made to look as though they have fallen from the sky rather than come from the ground. I became inspired by these buildings. I’d always been interested in welding and after my experience with Michael, steel seemed the obvious choice. Even though steel is a very tough, strong, almost macho material you can make it look quite weightless by adding colour and adding a curve to it. So, I started experimenting with geometric shapes and curves, producing a few small pieces in my double garage studio at home, and it just snowballed from there. 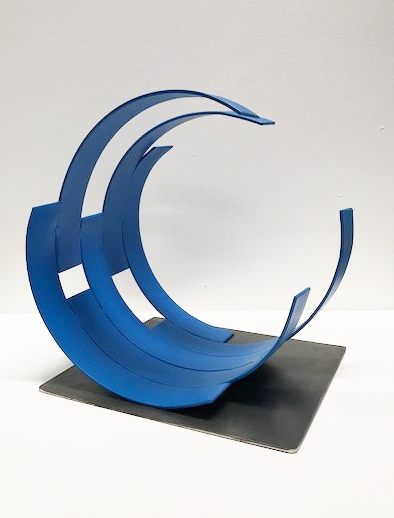 The work seems to go down well with galleries and I have won several awards. Ideally, in the next five years I’d like to be a fulltime sculptor. That is what my real love is - sitting in the studio and making art work. I sell my work quite a bit, but it is not consistent enough for a full-time job.

I have had one of my pieces splashed all over the newspapers though. Manchester United were looking for something inspirational for the players to look at before they went on the pitch. They decided to commission a mosaic of the club’s crest in the dressing room. A friend of the family works at Manchester United as the chief scout so my name got mentioned and I got asked to make it. I went down to United and meet some of the players; I was even interviewed on BBC Wales. Then, in 2016, Manchester United players Zlatan and Pogba used the mosaic as a background in a lot of press images and it went viral! 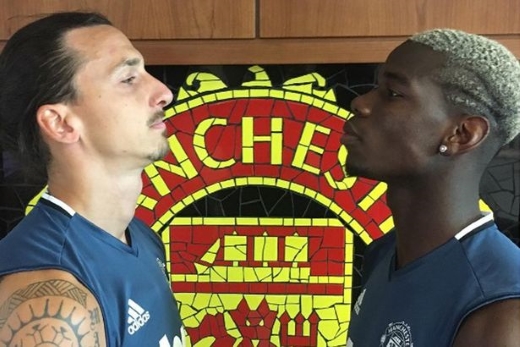 Zlatan and Pogba face off in front of Gareth’s mosaic in the Manchester United changing room (Image: Instagram/iamzlatanibrahimovic)

While working at the University has removed the stress of selling work to make ends-meet. It is also a great place to work. I love working out how to help students work through the sculpture process. It can be really inspiring. Someone comes to you with something you’ve never done before so you spend a week or so researching how to do something completely new which you wouldn’t do working alone in a studio. It has opened my mind up to so many different ideas and forms. It is kind of an ideal job…full-time sculptor aside!

If you want to see more of Gareth’s work please take a look at his website: http://www.garethgriffithsartist.co.uk

Gareth is a sculpture technician. He helps students bring their treasured ideas into three dimensional reality; ideas that until then have only existed in their heads. This is his #TechnicianJourney.