Enjoying the many attractions at this year's Staff Festival 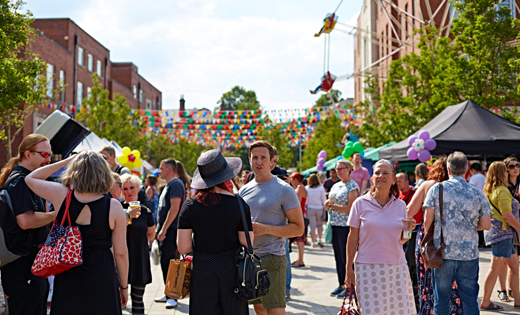 Thousands of people flocked to the campus celebrations on 6 July, enjoying an entertainment extravaganza staged on a beautiful summer’s day.

With the theme ‘A Festival of Making’, the packed programme of events included workshops, refreshments, live music, games and competitions for all ages.

Feedback via the online Staff Festival survey also revealed the vast majority of those attending the event thoroughly enjoyed the mix of activities.

“I really enjoyed the atmosphere, the variety of activities for adults and children, but mainly the opportunity to bond with colleagues in a work environment that was supportive of that opportunity.”

“Great Festival – best one yet. Thank you to everyone involved in organising such a great afternoon.”

“Many thanks for all the hard work you must have put in to make this event such a success.”

“Really love the Festival. Thanks for putting it on for us.”

Staff also used the survey to highlight aspects of the Festival they feel could be improved next time around. Issues raised included the length of queues at some of the most popular stalls and the signposting of attractions on campus.

Committee members have begun analysing suggestions to see if they can be incorporated into the 2019 Festival, the planning for which is already underway.

LOGIK Centre administrator and Staff Festival organising committee member, Jenna Hudson, said: “On behalf of the committee, we would like to thank everyone who attended A Festival of Making, which was a huge success.

“It was a pleasure, as always, to work on the Festival and we look forward to the 2019 event.”

Official photos from this year’s event have now been uploaded on the Staff Festival website and are available to view via Flickr.