One of the University’s Teaching Fellows has won a prestigious international competition.

Dr Oliver Thurley, who has been awarded the 2018 Kranichstein Music Prize 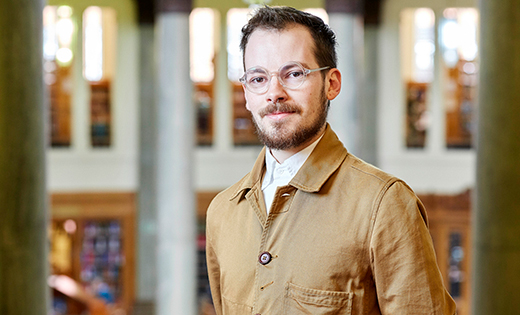 Dr Oliver Thurley, composer and Teaching Fellow in the School of Music, has been awarded the 2018 Kranichstein Music Prize, as part of the 2018 Darmstadt Summer Courses in Germany.

The Prize awards laureates for a work/performance the jury judges to be outstanding in terms of quality and impact between two criteria – composition and interpretation.

For many, this award marks an important milestone at the beginning of their musical career.

Dr Oliver Thurley, who was awarded a PhD by the University in 2016, won the composition laureate alongside Sara Glojnarić (Croatia) and Martin Hirsti-Kvam (Norway). His work is concerned with quietness and fragility, temporal disorientation and timbral (the perceived sound quality of a musical note, sound or tone) instability, as well as computational/algorithmic procedure.

Thurley’s music impressed the jury with its “sophistication, consistency, and individuality”.

Of his award, Oliver says: “I am honoured and delighted to receive this prize.

“I would like to make special thanks to the performers – Rahel Schweizer, Nate Chivers and Thilo Ruck – who brought my music to life, and to the other participants, tutors and organisers for all their support throughout the festival.”