“As Chancellor, Jane Francis epitomises all that is good about Leeds.”

Professor Dame Jane Francis, pictured during the robing for her installation as the University's new Chancellor 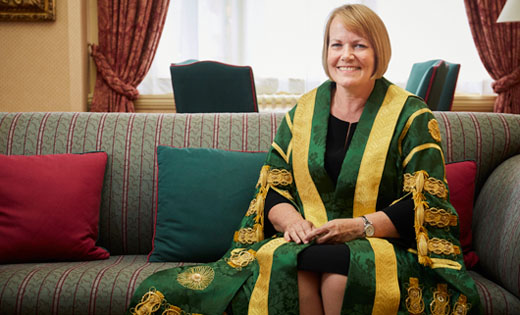 These were the inspiring words – among may other glowing tributes – delivered by the University’s Vice-Chancellor, Sir Alan Langlands, during the official installation of Professor Dame Jane Francis DCMG as the seventh Chancellor at Leeds on 9 July.

Another glorious summer’s day on campus greeted visitors and guests attending the ceremony, staged in the Great Hall.

Hundreds turned out to mark the occasion, including a procession of Deans and honorary graduates, all pre-eminent in their respective fields and, as a group, reflecting the new Chancellor’s professional interests.

Dame Jane is a prominent polar scientist, who worked at Leeds for two decades until 2013, when she was appointed Director of the British Antarctic Survey.

The University’s School of Music Saxophone Quartet played a selection of jazz standards for the audience, before an ensemble of students, staff and alumni performed A Thousand Beautiful Things, arranged by Dr Ian Sapiro, a lecturer in Music at Leeds. One of the new Chancellor’s chosen tracks when she appeared on BBC Radio Four’s Desert Island Discs last year, the Annie Lennox song served as a fitting introduction to proceedings. 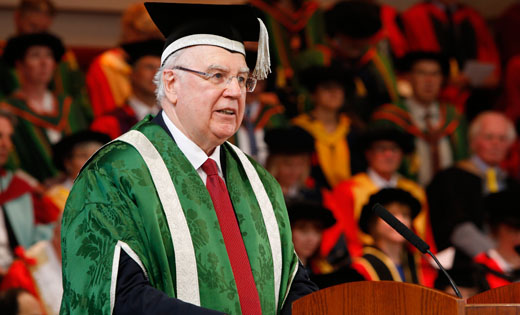 Addressing those present to witness the ceremony, Sir Alan added: “At the dawn of two exhilarating weeks of degree ceremonies, it is my honour and a great personal privilege to introduce Jane Francis as the seventh Chancellor of the University.

“Jane is a distinguished scientist and an inspirational teacher with a long career in academia, which includes 22 years as a valued member of the Leeds community.

“As Chancellor, Jane Francis epitomises all that is good about Leeds. As a leader and an advocate, she personifies our commitment to academic excellence and our values of integrity, inclusiveness, community and professionalism. She has said (and I quote) that ‘helping to inspire passion and achievement is what excites me in my work’ … and we cannot ask for more than that.

“For me, Jane will continue to be an inspiration to our students and staff, both as an academic with an exceptional track record in education and research, and as someone who has pushed the boundaries of human endeavour. Her concern for the beauty and fragility of Antarctica and her determination to address issues of global importance will capture the imagination and excite current and future generations of students. She is the perfect ambassador for a university intent on making a difference in the world.

“Above all – given Jane's long and distinguished association with the University – her appointment sends an unequivocal message of self-confidence in the University's inner strength and ability; and it reinforces the importance of knowledge, understanding and objectivity in tackling global challenges, and ensuring that we continue to stretch the intellectual horizons of our students.” 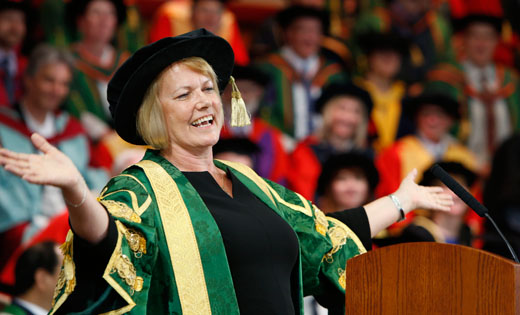 Dame Jane said: “I am truly honoured to take up this post. It’s great to be formally associated with the University again because I had such a fantastic career here.

“I was really quite surprised and honoured when Alan rang me up and asked me to be Chancellor. Without a doubt it was a ‘yes’. Who wouldn’t like such a nice job as shaking hands with students on the happiest day of the year when they are just graduating? It’s a fantastic thing.

“Being Chancellor is not something you put on your career plans, is it? But it is truly a pleasure for me to be here. It’s also an honour to follow Melvyn Bragg, who was Chancellor for so many years.

“Standing here, I am very conscious of the seats behind me, where I sat for 22 years as a member of staff, watching happy students and proud parents celebrate their big day. The University certainly has changed since that time and I have seen it go from strength to strength over the years. I bump into Leeds graduates everywhere I go – on the Tube, in government, in business, overseas. They have taken all walks of life. Their education was superb and they really have gone on to do the most amazing things.

“I hope I can also inspire students to follow their dreams.

“I am delighted to see so many friends here today – a lot of people who were wise mentors, fantastic colleagues and good friends, who shared awful jokes (the Deans). And I am delighted we have some really great people, who I admire greatly, as honorary graduates today. It’s fantastic they are now associated with the University.

“So, thank you again for this great honour to be your Chancellor. I am delighted.”

The University’s recently-appointed Professor of Poetry, Simon Armitage, who read two of his works, said: “A ceremony such as this, which includes the installation of our new Chancellor, should be a celebratory occasion. And for that reason, I went through my work to find positive and uplifting poems. It turns out I don’t have any!

“But what I do have is any number of poems about snow and ice, which I thought appropriate given today’s interest in all things cold and frozen.”

He was among a select group of people chosen to perform during the ceremony, which included Opera North stars.

Gordon D Shaw sang Kurt Weill’s Lost in the Stars (from Lost in the Stars) with great gusto, as well as Jerome Kern’s Ol’ Man River (from Showboat). And Cordelia Fish gave a stunning rendition of Quando Men Vo, from Puccini’s La bohème, enlisting the unscripted support of Pro-Chancellor, David Gray, in the process!

Perfect Day (Lou Reed), arranged by Vicky Burrett, was performed by the Clothworkers Consort of Leeds, who also played Fauré’s In Paradisum (from Requiem Op. 48) and Prayer (from Diptyque), composed by Associate Professor of Music at Leeds, Dr Michael Spencer. Vicky, the University’s Graduate School Manager in the Faculty of Education, Social Sciences and Law, is a former student of the School of Music.

The Vice-Chancellor said: “I rather like this music. I wonder if we might have it at every graduation ceremony!”

And Dame Jane added: “I’d just like to say thank you to these guys, who are all members of the University. That was absolutely spectacular.

“Lou Reed’s Perfect Day is a song most Antarctic people know about. There is a perfect day in Antarctica, when the air is still, with those glittering bits of snow, when the sun shines and it’s just the perfect description of tranquillity. Your rendering of it has been absolutely perfect, and I’ve been taken back to a certain time in a tent in Antarctica when we just celebrated a perfect day. So, thank you very much.”

Professor Alice Roberts, who received an honorary degree during the ceremony, gave the vote of thanks. She said: “I am absolutely delighted to be here today and in such esteemed company – it’s an incredible honour.

“What a wonderful day; what a perfect day to be here graduating at the same time as Dame Jane Francis becomes the new Chancellor. She is going to be a wonderful Chancellor." 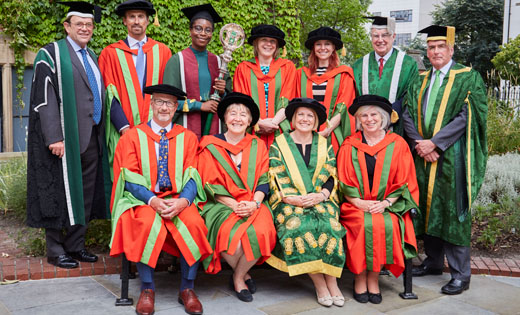 Professor Dame Jane Francis, ahead of her installation as the University's new Chancellor, is pictured with honorary graduates; University Secretary, Roger Gair; Serene Esuruoso, the Education Officer in the LUU Executive, who was the Mace Bearer on the day; Vice-Chancellor, Sir Alan Langlands; and Pro-Chancellor, David Gray

Honorary degrees were awarded to:

Kenton Cool, who was among the first students the new Chancellor taught when she first arrived at the University, said: “Today has been a journey of discovery coming back to Leeds, just re-living graduation again. It’s been fantastic.”

Peter Gibbs said: “It’s a real honour to be given this honorary degree on the same day as Jane Francis is installed as Chancellor. Jane is someone I have great admiration for and a common connection with, in terms of the Antarctic – a place in the world that I absolutely love.”

Professor Gabriele Hegerl said:  “This was wonderful – it’s been a wonderful occasion and wonderful music.”

Jane Rumble said: “Today has been an absolute honour and it’s been so inspiring being with all these great people, particularly with such a polar focus.”

Pro-Chancellor, David Gray, said: “What a celebration we have just seen, and on behalf of the Council, the University and everybody here, I would like to thank all those who have made this possible; our honorary graduates, who have added such lustre to this occasion and, of course, Professor Alice Roberts, who has just delivered such an uplifting, inspiring and enjoyable vote of thanks on their behalf.

“Professor Simon Armitage with incredible reading of his own poetry, helping us to at least think of cooler climes. The University Secretary [Roger Gair] and his team, and everyone else involved in the organisation of this celebratory event. I know, and have seen, how much energy and effort has been put in to this to such great effect.

“Nearly five years ago, in my first weeks as Pro-Chancellor, I had the opportunity of meeting you, Chancellor, perhaps with some trepidation as I was new and I was in awe of your achievements and standing in the academic community. However, I had no need to be nervous as what I found in your office was only the slightest nod to these – with an ice pick and a few pieces of rock – and the person who emerged from behind the great pile of papers to greet me was obviously someone whose intellect and capability was more than matched by her humility and warmth.

“What was also apparent was your undoubted passion for your subject, your students and your university. You will be a great Chancellor and we are delighted by your appointment.”

The musical ensemble, which had also sung Orinoco Flow (Enya and Roma Ryan) earlier in the ceremony, performed Dr Sapiro’s adaptation of music from The Last Place on Earth (Trevor Jones), a TV mini-series about Amundsen and Scott’s Antarctic expeditions of 1911-12, to close proceedings.

The installation was the beginning of the University’s degree ceremony fortnight, which will mark the achievements of more than 4,000 students.

A number of other distinguished individuals will be presented with honorary degrees during the fortnight, in recognition of their outstanding contribution to their respective fields and to society.

Read more on the University website, including biographies of each of the honorary degree recipients.

Watch the recording here as we welcome, and install, our new Chancellor, Professor Dame Jane Francis: