Smouldering-snouted dragons and sword-bearing knights will be side-by-side with birds of prey and medieval musicians on campus this week. 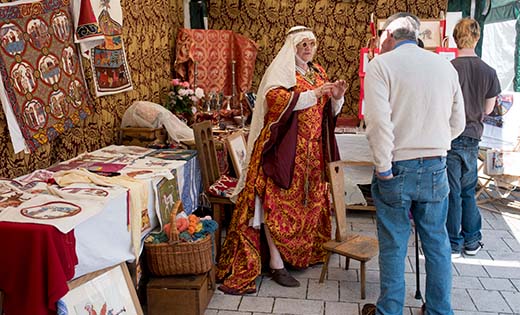 Across a quarter of a century the International Medieval Congress (IMC), held each summer at the University, has grown into the world’s largest medieval studies conference.

As many as 2,900 researchers and scholars from 66 countries will descend on Leeds for the event's 25th birthday, which runs from Monday 2 to Thursday 5 July and features a staggering 750 separate academic sessions comprising 2,200 individual papers, plus a wide range of performances, readings, round table discussions, excursions and book fairs.

The theme for this year’s event is ‘Memory’, although subjects covered range from archaeology, literature and medicine, to papers about Game of Thrones.

On Thursday 5 July, as is now traditional, members of the public of all ages are welcomed to the heart of the University for Making Leeds Medieval, a free event from 10am -6 pm.

There will be displays and demonstrations of birds of prey, thrilling combat displays, medieval food, drink and crafts. Visitors will also be able to meet some of the historical and archaeological societies working to preserve the history of Leeds and Yorkshire.

Featuring for the first time will be huge smoke-breathing dragons, swooping and soaring above the crowds.

IMC Director Axel Müller has been involved since the beginning. He said: “It’s really important to us to see members of the public of all ages enjoying some of the more colourful aspects of medieval life.

“I have seen people present their first ever academic paper in Leeds who are now senior academics all over the world. It’s a supportive environment where medieval studies is allowed to flourish and grow.”

Attending this year will be 10 people who have attended every single IMC – among them a delegate from Maryland in the US.

An exhibition about the history of the IMC will also be on display; this academic year has also seen the 50th anniversaries of the Institute for Medieval Studies, which runs the Congress, and the International Medieval Bibliography – one of the world’s most valuable resources for researchers of the Middle Ages.

Parkinson Building will be lit up at night in red – the Congress colour – from Monday to Wednesday (before the lights switch to blue to mark another significant milestone, the 70th birthday of the NHS).

The IMC has also continued to develop in response to trends in medieval research. Where most paper proposals have historically focused on the European Middle Ages, this year boasts a dedicated ‘Global Middle Ages’ theme, reflecting the growth in proposals on topics beyond Europe’s boundaries and the importance of links between medieval civilisations across the world.

And the inaugural New Voices lecture is another first, dedicated to showcasing new perspectives in medieval studies from early career researchers.

Mr Müller added: "When the IMC started we wanted to make it truly international, and while we have achieved a great deal in the past 25 years, it is only the tip of the iceberg of how much more ground-breaking collaborative work is still to be done.”

10.30am: Here Be Dragons. Headstrung puppet theatre brings dragons to the IMC.

1pm: Combat Display by Three Swords in the Combat Arena - a thrilling demonstration of arms and armour from the 15th century.

2.30pm: Who were the Sogdians? Nadeem Ahmad from Eran ud Turan will provide a brief introduction to this ancient Iranian civilisation, which established trading networks all across the Silk Road.

3.30pm: Here Be Dragons final performance of the day.

4pm: Combat Display by Three Swords in the Combat Arena – a demonstration of Roman arms and armour from late antiquity.

Ongoing displays throughout the day include:

Three Swords: Encounter weapons and combat experts, providing a unique insight in to the arms and armour associated with two different stages of the development of the Arthurian legend. Costumed interpreters from Three Swords will also be circulating throughout the day.

Eran ud Turan: Learn about the history and culture of the Near East and Central Asia, with demonstrations of coin striking as well as interactive displays of calligraphy, clothing, and armour.

Daughters of Elvin: Wandering minstrels will provide the perfect musical accompaniment to the activities, demonstrations, and performances at Making Leeds Medieval.

Lindstock & Pledget: Consult with a medieval surgeon’s assistant and take a look at a working trebuchet.

The Mulberry Dyer: Try your hand at papermaking and bring home a sample.

SMJ Falconry: On the grassed area next to the marquee, view a selection of birds of prey including falcons, kestrels, merlin, hawks, and owls, and find out about the how they were handled and used.

Stamford Bridge Tapestry Project: Inspired by the Bayeux Tapestry, this impressive work of embroidery, stitched in wool on linen will eventually be 15m long. View the progress on this impressive tapestry, witness the experts at work, ask them questions and admire their handiwork.

RT @CDSLeeds: WANT TO DO A PHD WITH US? **WITH FUNDING** Fantastic doctoral studentship scheme specifically for UK students from #Black, #…

National publication for conservationist poet Matt Howard has had his poem ‘The Pond’ featured in news magazine Th… t.co/xhTCutgjYl