Professor Dame Jane Francis will be officially installed as the University's new Chancellor on Monday 9 July.

Professor Dame Jane Francis, pictured when she received her honorary degree from the University 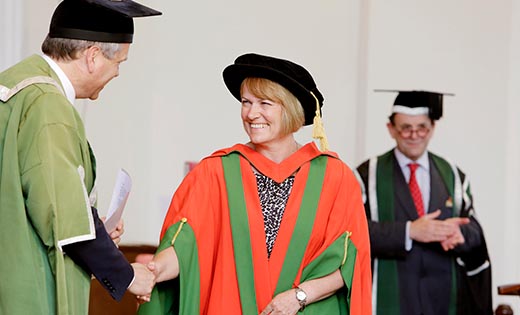 Dame Jane is a prominent polar scientist, who worked at Leeds for two decades until 2013, when she was appointed Director of the British Antarctic Survey.

During the installation ceremony, honorary degrees will be conferred on six individuals, all pre-eminent in their respective fields and, as a group, reflecting the new Chancellor’s professional interests.

The installation, taking place in the Great Hall at Leeds between 2.30pm and about 4pm, is the beginning of the University’s degree ceremony fortnight, which will mark the achievements of more than 4,000 students.

If you would like to attend the ceremony, please contact Adele Laverton as soon as possible. Space is limited, with places allocated on a first come, first served basis.

A number of other distinguished individuals will be presented with honorary degrees during the fortnight, in recognition of their outstanding contribution to their respective fields and to society.

Sir Alan Langlands, the University’s Vice-Chancellor, said: “It is a privilege to acknowledge and honour such distinguished individuals, all of whom have contributed great knowledge, understanding and expertise in the service of society. We are proud to celebrate their achievements.

“And, of course, we are thrilled to welcome Jane as our new Chancellor. She will inspire our students and staff and Leeds alumni around the world with her unfailing commitment to academic excellence and as someone who has pushed the boundaries of human endeavour.”

Jane was announced as the University’s Chancellor in December 2017. She succeeds Melvyn Bragg (Lord Bragg of Wigton), who stepped down after 17 years in office.

The Chancellor acts as an ambassadorial figurehead and advocate for the University.

Jane will preside over degree ceremonies and confer degrees, chair meetings of the University Court and support profile-raising events.

She has strong ties with the University, with a 22-year career at Leeds before joining the British Antarctic Survey.

Speaking at the time of her appointment, Jane said: "I loved my time at Leeds and feel truly honoured to be back as Chancellor. Helping to inspire passion and achievement is what excites me in my work, and in this role I hope to be able to do just that.

Read more on the University website, including biographies of each of the honorary degree recipients.