Work is underway to create a lasting legacy to people whose lives have been touched by brain tumours.

The quilt square sent by a brain tumour sufferer from Canada 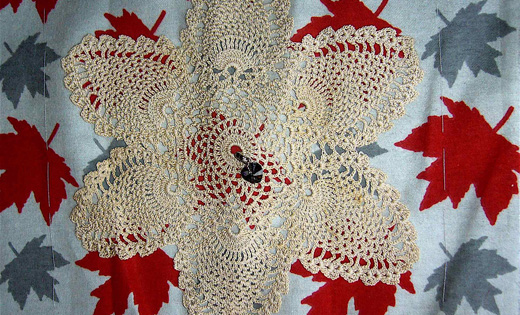 Dr Anke Brüning-Richardson, a senior research fellow at the Leeds Institute of Cancer and Pathology, launched the Piecing It Together campaign last year, and has been overwhelmed by the response.

Anke put out an appeal – including through University channels – for people to make and send her a textile-based fabric square depicting their feelings about brain tumours.

And more than 90 flooded in, from as far afield as Canada.

Now, under the expert eye of Dr Jane Scott, a Senior Teaching Fellow in the School of Design at Leeds, she is carefully stitching the squares together to create a quilt. This will be used for awareness-raising at science fairs and other public engagement work.

And the project has particular poignancy for Anke.

She said: “It means a lot to me personally as having experienced cancer in a most personal way – my father passed away from lung cancer three years ago – I am determined to make a difference, not only through my research but also my activities outside my research world.

“I want to show sufferers and their loved ones that there is a way forward, and with all the work we are doing we are getting a bit closer to fighting this dreadful disease. I want to give hope and support and I want to take away the fear that often comes with a cancer diagnosis.”

Anke is involved in research on the development of novel drugs that stop brain tumour cells from spreading into healthy parts of the brain. Her work has been funded for the past six years by Harrogate-based The PPR Foundation.

She couldn’t help but be touched by the personal stories told with the arrival of each new quilt square.

A brain tumour sufferer from Canada was the first person to respond to the appeal. She said of her Maple Leaf design: “Being a Canadian symbol, it inspires kind thoughts, wishes and – most of all – support from across the miles (from a cold place!).”

Another participant wrote about her square remembering a dear friend: "I include images of pick and mix sweets in my square as when we spent time together, he would always nick my pick and mix!"

Anke added: “There is the link to the textile industry in Leeds but, also, making up a bigger picture out of pieces is a bit like trying to understand the disease better. We still do not know very much about brain tumour biology, so I think this quilt also symbolises this. By putting together the pieces we get a better picture of how to tackle this disease.”

An unveiling of the quilt is being planned for later in the year, to hopefully be held in the Bexley wing of St James’s Hospital.