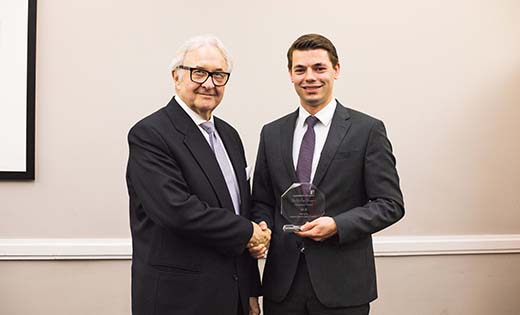 The JetLink business venture is led by 2nd year BSc Economics and Finance student, Tim Knickmann (20), together with his friends Rory Spies (20), a student at the University of Warwick; Henrik Polzer (20), a student at New College of the Humanities; and Thomas Nellinger (32), who was Henrik’s pilot instructor.

The team believes it can cut the cost of chartered flight by more than a half, as well as offering a faster and more efficient service than competitors.

“The chartered aviation industry is inefficient and hasn’t kept up with technology advances,” explains Tim. “We’ve addressed both of these issues with JetLink; we don’t own the aircraft so there’s no ‘dead time’ or housing costs and the aircraft we use are smaller and more fuel efficient than the large aircraft used by competitors. There’s also no real need to employ cabin crew to serve drinks for short flights.”

Tim says the real innovation behind JetLink is a bespoke algorithm that simultaneously checks the availability of pilot, aircraft and airport, automatically calculating the most efficient connection between transport on the ground and in the air for clients. It’s a completely streamlined, door-to-door booking service: taxis pick clients up and take them to the waiting aircraft; when they land at the nearest airport to their destination, a taxi is waiting to complete their journey.

“There’s no need for brokers to be involved – we arrange everything and the client only pays once,” says Tim.

The Awards are organised by the business start-up service, Spark, at the University’s Careers Centre. Leading the judging panel was serial entrepreneur and University benefactor, Michael Collins. He said: “JetLink has identified a problem in private jet hire and created a sustainable solution. I am very impressed with how well thought through its business model is and how flexible its approach to customers will be. The team is very driven and I sense it is motivated to do the right thing and this is something investors should consider investing in.”

The £5k prize has already been put to good use, allowing the JetLink team to create marketing materials to exhibit at the world’s largest aviation fair, Aero2018 in South Germany.

Tim adds: “Prize money is always going to be very useful, but even more so is the credibility that comes from winning this award and having the backing of someone like Michael Collins. We’re looking for investors now, so the recognition is incredibly helpful, as was the experience of pitching to the judges, as we’ll have to do more of that to secure the investment we need. We’d intended to launch cautiously with one plane and three pilots but have decided to find seed funding to launch with five planes and 12 pilots across Europe.”

“It’s rare that the term ‘high flying’ entrepreneurs is so apt,” says Spark’s Head of Business Start-up, Kairen Skelley, “but in this case it’s true. The JetLink team is a worthy winner and the scale of its ambition is admirable.”

In addition to the main prize, for the first time an exceptional award of £1,000 was made to third year Performing Arts students, Molly Rumford and Katie Mahon, for their business, Bloomin’ Buds, which delivers drama-based support to young people struggling to access opportunities due to social and educational disadvantages.

Molly and Katie also received a special prize in the Business Plan Competition 2018. Read more about the Competition.