Personal experience of major health challenges are the driving force behind a committed charity fundraiser's plan to cycle solo across America. 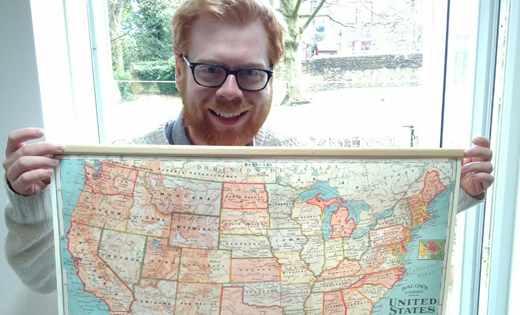 Antony Butcher, an Education Service Officer in the Schools of Music and Performance and Cultural Industries, has already raised more than £15,000 for a range of good causes.

Now, the 28-year-old is aiming to raise a further £20,000 to support people living with Multiple Sclerosis (MS) and those with mental health challenges.

As part of his journey, called The Road to San Francisco and planned for 2020, Antony will be seeking to have as many conversations about mental health as possible. He will be speaking at schools, colleges and community groups, both in the UK and across America, to try and remove the stigma that can exist around depression and anxiety.

Antony experienced his own mental health challenge last year when he suffered a bout of depression.

“It was when my wife – who has much more experience of mental health – told me she was worried for me and I needed to go to the doctors that I knew something was wrong. I started noticing myself welling up at random. I fidgeted, wringing my fingers and flexing my hands like I was playing a piano hidden in my palms.

"Then one night, in the shower, for the first time in my life I thought about whether people would miss me if I just disappeared. I considered just walking away from everything, walking out into the countryside to escape all the pressures I was feeling. I was scared at what I was contemplating – I had dark thoughts that I never want to have again.

"Talking about my experiences helped me realise I wasn’t alone, and I believe it’s so important for us to make talking about mental health normal – particularly when you consider that suicide is the biggest killer of men under the age of 45 in the UK."

The announcement of the challenge coincides with Mental Health Awareness Week in the UK.

And there is another personal reason for Antony attempting the ambitious adventure.

He said: “My mum was diagnosed with MS whilst I was at school, and since then, the condition has taken its toll on her.

“I’ve seen first-hand the painful impact MS has, and whilst this bike ride isn’t going to magically make my mum better, it will hopefully be a small step towards better support and maybe even a cure.”

Antony has cycled from Land’s End to John O’Groats twice, but this is taking his two-wheeled exploits to a whole new level.

His route between New York and San Francisco will be nearly 3,500 miles, taking more than two months to complete. He’ll be leaving his wife, Lizzie, and cats, Lily and Luke, at home in Yorkshire whilst he deals with both mountains and deserts… as well as wolves, bears and wild dogs!

Antony is currently planning logistics and is keen to hear from anyone with contacts in America who might be interested in the ride.

He isn’t new to the fundraising game, having donated £1,000 to the Bradford-based Cellar Trust last year by having a sponsored head-shave.

To help raise money for this new challenge, Antony will be organising a wide range of fundraising activities, including bag packs, street collections and lots of cake sales. He will also be running the London Marathon next year.

Money raised will be split between the MS Society and a range of mental health charities, including the Cellar Trust.

You can sponsor Antony by visiting his JustGiving page. Visit his website for more details about Antony’s ride or sign up to receive occasional updates about the challenge. Antony is keen to raise awareness and fundraise across the University, and will happily come and talk to staff or students, or help organise (and bake for!) a cake sale. Email him for further information.

Antony has been based on campus since 2014, having previously worked at the School of Law.

He said: “Part of my job involves student support – being a point of contact for students who are struggling, whether it’s financially, academically or with their mental health. It means I have an opportunity to listen to them and point them to some of the excellent resources we have across campus.

“We know being at University is both a huge opportunity but also a really stressful time, and that the rate of mental health problems is higher at University than the UK norm, so it’s really rewarding to be able to be a part of the support network available for our students. I’m also lucky to work in an environment that is very supportive of mental health, and have excellent support from my line manager.”

Antony also runs a mental health blog, setting out both his own experiences and sharing other people’s stories anonymously.

“Running the blog has been an eye-opening experience,” added Antony. “It’s been incredible to discover I’m not alone, and to see how many people battle with their mental health and the stigma that surrounds it.”

RT @GreatFoodLeeds: 📢 Service Update 📢 Hugo has clocked off early today due to strong wind, head to The Edit Room to get your coffee fix…