Leeds International Festival is running across the city from Friday 27 April until Saturday 12 May. 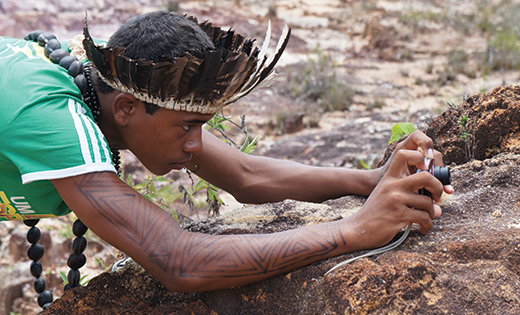 Billed as the UK’s leading metropolitan festival of new ideas and innovation, it features a programme of compelling speakers, original performances and discussion that celebrates innovations in science, music, interactive media and international culture.

The University’s Cultural Institute is among the event’s partners, and a film screening and photography exhibition this weekend feature a project closely linked to work by Dr Thea Pitman, Director of Spanish, Portuguese and Latin American Studies in the School of Languages, Cultures and Societies.

The film, Indigenous People Go Digital, highlights the culture and traditions of several indigenous groups from north-eastern Brazil, examining the ways in which these communities, supported by a non-governmental organisation (NGO), Thydêwá, have used digital tools to help increase their visibility, fight prejudice and lobby the government for their rights.

The screening is on Saturday 28 April, 7-9pm, in Duke Studios. Free to attend, but places are limited and filling up fast. Book here.

The documentary is in Portuguese, with English subtitles, and will be followed with a Q&A session with Thydêwá’s director, Sebastián Gerlic, in conjunction with Dr Maria das Dores de Oliveira of the Pankararu community.

The Cultural Institute which brokers pioneering research collaborations with creative sector partners, widens cultural engagement and participation and builds the skills students. These events are also supported by the British Academy.