Professor Helen Miller is one of the UK’s leading experts in pig and poultry nutrition. 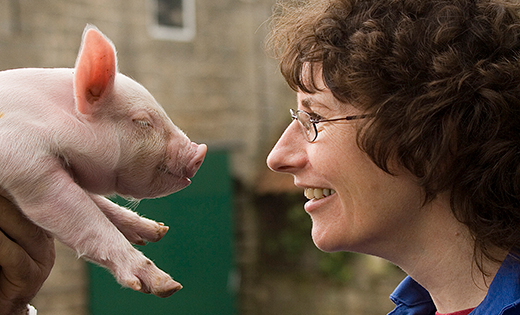 Helen Miller, has been elected President of the British Society of Animal Science (BSAS). The professor of animal bioscience, and managing director of the University Farm, succeeds Scotland’s Rural College's (SRUC's) Richard Dewhurst, who has become a trustee of the society.

Professor Miller is known for her work on developing feeding systems, which enhance animal health, performance and meat quality.

Having studied and worked in Bolivia, Australia and Canada, she joined the University in 1996, where her research has looked at issues ranging from comparing the performance of pigs in outdoor and indoor systems, to the effects of feed additives.

Her work investigating piglet success after weaning has also lead her to help develop a group feeding recording system, which aims to uncover why some pigs eat more and do better.

Speaking at the BSAS Annual Conference in Dublin (10 April), Professor Miller said she was honoured to lead the society during its 75th anniversary year: “My theme for the next year is going to be ‘fit for the future’.

“As we go into the 75th anniversary as a society, it’s a great time for us to consider where we are, where we’re going and what the strategy for the next 25 years needs to be.

“Over the next 12 months, I want to work with the BSAS team to build momentum to drive the society and ensure we are prepared for the challenges facing the livestock industry, both now and in future.”

Professor Miller will be assisted during her one-year term by Eileen Wall, who has become the society’s senior vice-president.

Professor Wall is a researcher in livestock genetics within SRUC’s animal and veterinary sciences group.

Michael Lee, professor of sustainable livestock systems at the University of Bristol, was voted in as the society’s new vice-president.

“I know I will have great support from my new vice-president and senior vice-president, and we are all agreed that we will try to build a continuum to drive the direction of the society,” Professor Miller added.

“Next year’s 75th anniversary conference in Edinburgh will give us the chance to spend some time reflecting on how we get here, where we have got to, and look at the future of where science is going.”

Bruce Beveridge, BSAS chief executive, said: “It’s fantastic to have such an engaged, enthusiastic and energetic leadership team at what is a pivotal point for BSAS as we enter our 75th year.

“The combination of experience and perspective that Helen, Eileen, Michael — along with the society’s trustees — bring will prove invaluable in shaping the society’s future, particularly at a time where the livestock industry is facing some significant changes.”