Head of Sport is going for Gold

Suzanne Glavin is going for gold at the Commonwealth Games… the Gold Coast, that is! 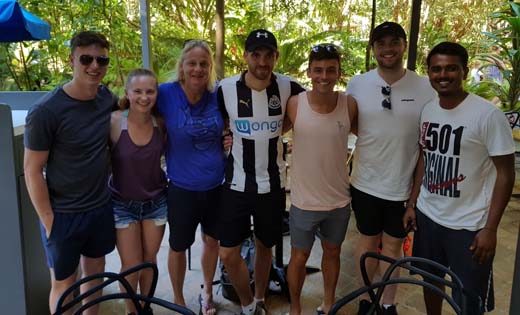 The University’s Head of Sport has taken her extensive volunteering track record to another level by heading Down Under.

Australia’s Gold Coast is hosting the sporting showpiece until 15 April, with 71 nations competing for glory.

Having recorded an online virtual interview, Suzanne was selected for a place on the Press Operations Team, looking after the photographers at triathlon and various cycling events.

She said: “I feel like the luckiest Games Shaper!

“I’ve managed to bag three amazing outdoor venues with some super sport. This includes Southport Broadwater Parklands, where I’m working on Triathlon events. It was a super high to see – from the photographers’ position at the finish – Jess Learmonth, one of our Leeds Triathlon Centre athletes, medal.”

Jess was England’s first medallist of the Games, bagging a silver in a keenly-fought contest. Two other female triathletes, who train at The Brownlee Centre and The Edge sports facilities but who are not Leeds students or Alumni, also competed in the event. Non Stanford, representing Wales, finished eighth while Scotland’s Beth Potter crossed the finish line in 12th.

But the action doesn’t end there for Suzanne.

She added: “I will be working with photographers at this same beautiful venue again, but this time for Para Triathlon and mixed relays. Fingers are crossed the Brownlees will dust themselves off to go again with Jess [they subsequently won a silver medal after this interview], and we have Tyler in the Bermuda mixed relay competing alongside Flora Duffy, who won gold in the women's event.

“I then head to Currumbin – a beautiful, idyllic part of coastline with an amazing nature sanctuary set just behind. Here, I will be supporting the Race Walk. It’s a 5am start, so I’m hoping to get a picture of the sunrise on the beach!

“I will return there on 10 April  to help out with Cycle Time-Trail and then again on 14 April for all the cycle road races. In between, I will be heading off to Nerang Mountain Bike Trials to support all the competitions there.

“To finish my most incredible journey, I head back to the Southport Broadwater Parklands to volunteer on the Marathon on 15 April. And we’re all hoping we get tickets for the closing ceremony!

"It’s relaxed, fun, friendly and exciting, with lots of people carrying their country's flag with them. The locals, in particular, are so proud of their athletes and their homeland, and are genuinely pleased the world has come to visit them. The Commonwealth Games are known as the friendly games and this one is no exception."

As a Sheffield Hallam University Alumni, Suzanne is in Australia with 12 students, past and present.

She said: “One student has shaken hands with the Prime Minister of Australia and another met Prince Charles! They inspire me with their daily commitment to be enthusiastic and applied, getting to venue on time in full uniform ready to go the extra mile in their roles. They work long hours, traveling a fair bit to venues and often in pressurised media roles. Hopefully, through our combined work, the world will see images of the Games and read stories of history in the making!” 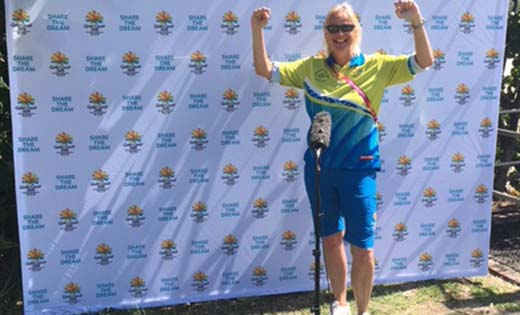 Suzanne Glavin on the 'grassy knoll' during the race walk event

And Suzanne is keen to apply some of the lessons she has learned at the Games in her role at the University.

She said: “Enabling young people to lead and grow through doing, developing contacts and enjoying the experience, is priceless, applying this to how we deliver our sport and physical activity services.

“It shows that whoever you are, or wherever you are from, you make a difference through your contribution. Working as an inclusive team, collaborating together to achieve a shared goal, is just the most satisfying, enjoyable, fun and life-enhancing experience.”

But Suzanne’s feet will hardly touch the ground after her plane touches down back in Blighty on 18 April, as she goes straight into volunteering at the London Marathon four days later.

Coming from such a strong sporting background, it’s perhaps no surprise Suzanne was drawn to volunteering.

In addition to appearing for Wales in netball at U18 level, she has played international rugby union, representing her country in the 1991 inaugural Women’s Rugby World Cup, facing the New Zealand haka in the process.

“I have a genuine belief in the power of sport and physical activity in making people’s lives better,” she explained.

And Suzanne is no newcomer to the volunteering role, having offered her expert services at the London 2012 Olympic and Paralympic Games, Glasgow’s Commonwealth Games in 2014, the World Rowing Championships at Eton in 2013, the 2015 Rugby World Cup and, most recently, at the World Athletics Championships in 2017. She also volunteers every year at RideLondon and as a flash quote reporter for the London Marathon, getting quick quotes from the athletes as they finish competing.

Suzanne said: “Volunteering has given me the opportunity to visit and spend time in other great cities and countries.

“I’ve met some wonderful people from all around the world, many of whom are now my friends. These opportunities have allowed me to learn more about the places and people, and it has enabled me to meet and liaise with Olympians, Paralympians, World Cup Rugby players and rowers from around the globe. I’ve created some memories for life, spending time with Usain Bolt, Jessica Ennis-Hill and Dan Carter – just to name-drop a few!

“I’d strongly recommend you make time to get involved in volunteering; you just never know what opportunities it will give you, now and in the future. If someone asks for you to help, just say ‘yes’ and see where it takes you!”

See Suzanne’s blog for updates on her exploits in Australia.